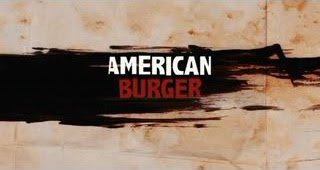 You would think a movie titled as American Burger would have an American cast or at least well-versed actors being passed as Americans. Apparently, this wasn’t the case for this Austrian backwoods survival type.

A tour bus full of literally nameless American students and their teacher takes a field trip into the deep European woods where they visit the processing factory of an apparent fastfood delicacy simply known as “American Burgers”. Once they reach the factory, they soon (and I mean real soon) find out that everyone in the factory is cooking literal “American” burgers and the teens find themselves hunted down by an army of white-suited butchers.

Wooden delivery and a total absence of story are the flaws you will expect from this film, but with the totality of American Burger being silly, deranged, and often funny, I learned to look pass these cons and enjoy the film for what it is: an outrageous survival-comedy with tons of kills, loads of blood, and bloody good burgers.

With the whole lot of the class being killed off within 5 minutes or so, the film shifts its attention to a group of random survivors as they try and find a way to live through the ordeal, from dressing up as one of the butchers when they found one dead from an apparent fight, to asking for help from a “seemingly normal” family. Most of these plans didn’t work out well and this is where most of the humour comes in; the jokes here poke fun at how Americans might react to a situation like this as well as satires slasher conventions such as people sticking together to survive and some disadvantages of being a nerd. Truth be told, however, I’ve felt like these funnies are often hit-or-misses and dependent on how well the audience can take in a bad joke, so the effectiveness of American Burger as a comedy is not a full guarantee for everyone.

Interestingly, the same can be said for it as a horror movie; those who love bad cheesy horror movies might appreciate this but gorehound slasher fans might get a little dissatisfied as the kills were simple knife and machete kills. (Though some did got bloodier for the sake of splatstick gags) The villains are interesting in terms that while some slashers have a set of killers or even an entire family doing the murders, little of them ever tried having an entire factory of uniformed killers with bladed weapons hunt down their targets. What’s admirable about this is that despite their large mass as an army, their scenes are as effective as any single backwoods killer on the prowl and their leader of sorts, aptly credited as “Demented Butcher”, is just adorable with his insane glee and dedication on keeping his burgers purely American, kinda like Drayton Sawyer of the first Texas Chainsaw Massacre (1974) sequel.

In the end, this is nothing but a silly movie that should be enjoyed as such, albeit it’s flaws. It’s funny despite some groaners, thrilling despite not overly creative, and it somehow made me hungry for some burgers. I’ll say give American Burger a try or face being beaten by an insane chef.