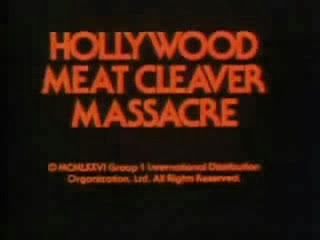 Even if it opens and ends with gothic horror icon Christoher Lee doing a lengthy lesson on occultism from around the world, Meat Cleaver Massacre can't hide how shlocky it is but (and this is a subjective "but") it might as well since the film did offered something worthwhile as a cheesy and overly-simple exploitation trash.

Professor Cantrell teaches demonology with a passion at some university, much to the interest of his class except one Mason who would rather bully his way around campus to feel great about himself. Unfortunately to the kid, Cantrell deservingly humiliated him on that day and wounded his ego enough to plot a home invasion and murder the professor's family.

With the help of his three lackeys, Mason nearly succeed with his plan if it wasn't for Cantrell surviving the attack and slipping into a wide-eyed coma. Worse, thirsty of justice-slash-revenge, the professor managed to contact a demon in his state and had it execute Mason and his lackeys one by one.

A bit misleading as no meat cleavers were used but Hollywood Meatcleaver Massacre is what it is and that is a cheesy supernatural proto-slasher guilty of being surreal and plodding in pace.

Boasting four screenwriters to tink around a rather interesting concept, the execution was unfortunately ever trashy and occasionally hammy that the film ended up feeling all over the place but, strangely enough, it still stood rather strong as an early entry to ghostly slashers as it featured (for its time) rather imaginative killings such as killer cacti and a post-Omen pre-Final Destination accident based deaths, as well as earning some notoriety as the home invasion sequence dreadfully resembles the infamous Mason family murders.

Much of Meatcleaver's charms hail from its strangeness as, despite simple the story is, the surreal nature of everything within and out of the horror is just too mind-boggling to ignore and enjoy as a 70s exploitation wreckage. It's nearly comical for its incoherence and messy production and I guess that's just the way we should be seeing this slasher.

It's not the finest example of a well-made supernatural slasher but Hollywood Meatcleaver Massacre didn't shy away from being gutsy, bloody, and most importantly, crazy which should be enough for a true cheddar, exploitation and/or slasher fanatic. Try it out or be damned by killer cacti.