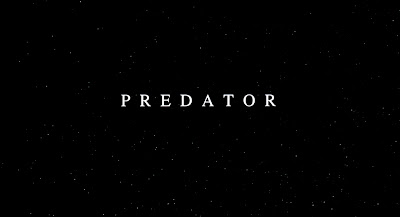 When does one man's Arnold Schwarzenegger action movie becomes another man's slasher? When the film's very backbone resembles one.

Arnie is Major ‘Dutch’ Schaeffer, tough as nails and willful enough to lead an elite group of marines to Guatemala for a rescue mission against guerrilla forces. After dwindling down an entire guerrilla camp's number to a single female captive, they find nobody else to rescue and are now, instead, hunted down by something armed with weapons and gadgets far too advanced to be of Earth.

It is understandable why many genre fans wouldn't look at this as a slasher film despite the bodycount friendly killings since Predator was marketed as an action adventure with a good dash of scifi and a whole lot of Arnold. (Then in the apex of his career as an action star) True enough, the film's first act featured enough gunfights to destroy an entire rebel camp (literally), making it seem like we're going to a direction where they'll be more macho-man badassery, but the film did took a sudden turn for the horrifying and thrilling.

Just as any slasher, we see something stalking the marines (through a thermal POV shot, no less) and, one by one, ritualistically murders them with blades and a high-powered laser; this tone shift pushes Predator into a backwoods survival flick-type, only with bulky men that do fight back (unlike our usual dumb teenagers), an alien killer, and a good load of kills. 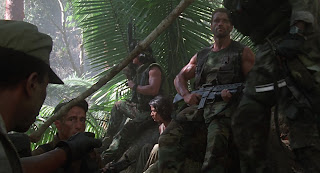 Effects wizard Stan Winston devised some of the most amazing effects I've seen in a genre film, utilizing animatronics and, for its time, impressive digital effects. The predator make-up is incredibly impressive and menacing as a creature. And seeing the film's no short of cash to waste on its effects, you can soothe the gorehound within you as the kills (those by the Predator at least) remain gruesome enough to rival a modest horror film kill, from heads blown apart with lasers to the cult iconic scene where a victim's skull was ripped out by the spine.

Acting around this part is genuinely modest since much of the focus is on the action; Arnold is still Arnold; big, buff, and bears the accent that makes me wonder why they keep giving him American characters to portray. I do like the fact how his character is bound by his role of being a leader of a search-and-rescue team which makes him easy to side with, even early on the film when he found out his team was used to assassinate nearly an entire compound, under the false pretense that they were rescuing a political head. The rest of the casts are pretty okay; they're nothing too dimensional but their characters are likable for a bunch of army cut-outs with sometimes-laughable dialogue.

Interestingly, in talks of the villain, this is not the first time we get a slasher film to feature an alien killer as, while some may argue, Alien (1979) appears to fit the label of a proto-slasher with its stalk-and-maim plot, and too the uber-cheesy but weirdly enjoyable Without Warning of 1982, which features an alien hunter killing teens in the woods using flying parasites as its weapon. (In fact, actor Kevin Peter Hall, who donned the heavy latex make-up as the Predator in this film, was also the alien hunter in Without Warning!) What Predator did that the other two aforementioned films didn't is that it gave its villain a full slasher treatment complete with a mask, bladed weapons, and a linear motivation to kill. Sure it may not be in par with the simplistic machete or shotgun, but a retracting saw-toothed wrist blades and a high-powered blaster is a welcome variety if it delivers the gore. 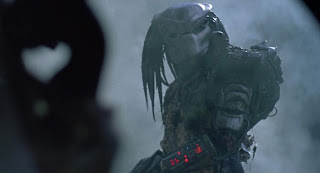 The way I see it, he had to be this high-tech to keep the "fairness" to the killings as his targets are as armed and deadly as he is once they get an advantage. And staying true to the butch finales of action films, once all but one is left, the final showdown between Dutch and the Predator had to be one of the more intense scenes in cinematic history, with the Predator, seeing how worthy of a foe Dutch is, accepts a fair brawl and disarms himself to go mano-a-mano.

In the end, Predator is a genre flick that can be enjoyed by both horror and action fanatics. Its has guns, it has guts, Arnold is still a badass, and there's a terrifying monster worthy of an icon; while it may lack a solid story, the entertainment value of it is a whole tirade of awesomeness! No genre fan can call themselves a genre fan without ever seeing this! Ever!