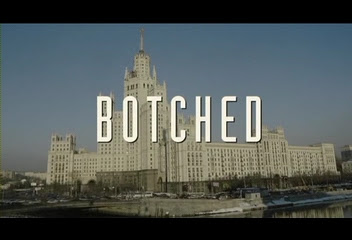 In Russia, if you mess up a crime, you'll get a second chance to prove yourself as the best thief there is! This was the case given to Ritchie, a professional thief who, after a diamond heist gone wrong, is hired by a mob boss to steal a priceless antique cross from a skyscraper penthouse in Moscow. Things almost went as planned until one of his accomplices goes trigger happy and shot a hostage along the way, leading to one mess up to another which eventually have them trapped in the unused 13th floor of the building with seven others.

Forced to take matters in their own hands, the thieves try to find a way out the floor without further casualties while the hostages plot to fight off their captors. Unfortunately, somebody else is in the floor with them; a deranged maniac with a habit of beheading and skinning victims under a sacred ritual. As the death toll rises, enemies become allies, allies become enemies, and booby traps take a limb or two.

A low-key splatter comedy, Botched is a cheap yet creatively funny slasher flick that features competent casts, brutal gore and some funny direction to an obscure story. It starts out quite similar to a another hostage themed backwoods slasher The Cottage (2006), with a planned crime going sour after a crazy mistake, only to go down a gory path that is as outrageous as it is funny, though compared to that film, Botched does not shy away from a decent onscreen killcount and silliness that's quite workable in a level.

I believe what makes this film work as a comedy is the wide array of characters; while Stephen Dorff's character Ritchie maintains a serious face through out the ordeal, the other sets include gentle God fearing women, a wimpy thug and his sociopathic brother, an army enthusiast turned cop, just to name a few; in a way, you don't usually get these kind of meat in a slasher film so how they react to the dangers surrounding and hunting them is quite a treat to watch. Better yet is that they're portrayed rather comically well, with odd developments and surprises keeping me watching for more, even if I kinda already see what fate awaits to some of them. (Read. Some!)

While not giving us the casual funnies, Botched caters to the horror crowd with some decent looking gore, though I have to admit that some of these kills lacked any sense of build or timing. The way I see it, the movie's gore scenes are closer to that of a slasher film with a hint of comedy, instead of that of splatstick classics like Evil Dead II or Dead Alive. They're played straight instead of for laughs, which I can't really complain much as it is still pretty neat in a gorehound's eye candy sort of way.

I guess the only flaws I see here is that the budget sometimes show and not all of the comic timing works; the killer's over the top nature can be a bit distracting and the ending felt rushed. If anything, Botched is like a live action take on a 70s Scooby-Doo cartoon with loads of gore; it is really nothing more than a fun film to rent if you're thirsty for some onscreen carnage all the while poking at how cheesy it is. That being said, this unheard little number deserves a viewing or two just for the laughs and limbs being hacked off!

Bodycount:
1 male crashed through windshield
1 male killed in car crash
1 female shot offscreen
1 male decapitated with a garden shear
1 female brained with a medieval mace, bled to death
1 male falls into spikes
1 male sliced in half with a sword
1 female shot to death
1 male ran through with a sword
1 female stabbed to death with a nail file
1 male set ablaze, dies from wounds
Total: 11
Posted by Kaijinu at 2:40 PM