A Reservation in Quantico: American Psycho II: All American Girl (2002) 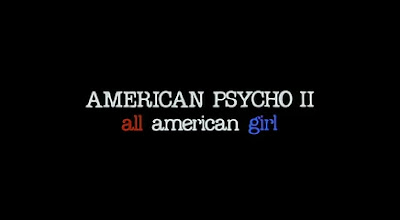 Welp, seeing how big of a fanboy I am for American Psycho, it's no surprise I have to go through this one as well, despite knowing one of my favorite anti-hero was, not only killed off, but was shamelessly replaced by slasherette who couldn't hold on to Mr. Bateman's torch.

The film begins with a young Rachel Newman tied to a chair as she watches her babysitter get eviscerated by the serial-killing yuppie Patrick Bateman. (Who is now portrayed by a different actor, wearing a face mask) Rachel somehow cut herself free and stabs Bateman with an ice pick before walking away with a vow that she'll hunt down every serial killer when she grows up.

Ten years later, Rachel is now at college studying criminology and hopes to get the teaching-assistant position under her professor, Robert Starkman (played by William Shatner), a job that may guarantee employment at the FBI. But becoming class assistant is a dream not without its complications with her age, experience, and other candidates being the many bumps on that road. Fortunately for Rachel, and unfortunately for these people, she has no problem wielding a murder weapon or two to cut down the competition.

The main problem with this film was that it tries to use the same narrative technique the first film did, by having the killer voice out her thoughts as she goes through the murdering as if it was interesting. This worked with the original American Psycho because the killer there do these killings as if it was a hobby, often sidestepping into other trivial topics such as pop music and exercise routines. In All American Girl, she voices her motives and reasons for doing the crime, which were sound. Extreme, but boringly and unimaginatively sound. This actually makes her less likable since, while Mr. Bateman's madness was influenced by near nothingness, Rachel's awareness of what she is doing does not shine the same kind of spontaneous quirk and reduces her to a petty murderer. 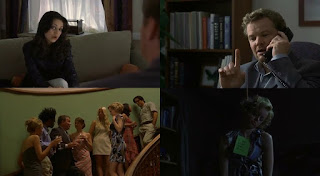 The reason for this was that the script was never an intended follow up to the cult classic; the real intention of the producers was to have Bateman take over Los Angeles and/or Las Vegas, but a few creative disputes lead them resort into adapting a sequel from a script titled "The Girl Who Wouldn't Die" and just plastered "American Psycho" to cash in with that film's success. In fact, the events from the first American Psycho was never mentioned here and the only tie-in All American Girl made with the first film was "Patrick Bateman", who can be easily replaced with any other murderer since he is only mentioned here as a "household topic".

What we have here instead is a slasher movie with a side of weak character study; the villainess is forgettable despite Mila Kunis' fair and sometimes cheeky portrayal, and the murders aren't all that imaginative and was edited into near nothingness. The direction is nothing in par with the depth of the original but it is okay as far as a slasher film is concerned; it has a level that it is watchable as a stand-alone movie but all the attempts tying this film with the first American Psycho just come off distracting and made this film desperate.

There isn't much else to say about this movie except that it is a shameful cash-in that does not understand the spirit of the first American Psycho. The 2000 film is franchise enough for the Bret Easton Ellis's novel so I failed to see the need for this cheap and cliched production. Angrier, deadlier and sexier? Hardly.