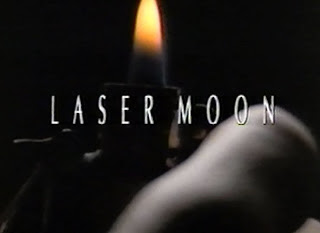 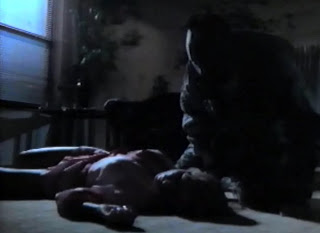 A serial killer is breaking into houses of lonesome women during nights with a full moon, murdering them by burning their temples with a high-powered surgical laser. Detectives are baffled by the nature of the crimes but got their first lead when a local DJ got himself a suspicious caller who may or may not be responsible for the "lasermoon" killings.

The title itself sounds cool but it doesn't strike anything of a slasher movie and this is because the film is more of a cop-thriller than a teen-kill bodycounter flick. While scenes involving the killer are very slasher film inspired, Lasermoon focuses more on the characters and the exploits of the police as they try to catch the maniac out frying victims' brains; the problem with this is that neither of these two sub-genres are handled properly.

The pacing is slow and the direction had us listening to one character to the next jabber enough uninteresting exposition to the point I was tempted to fast forward to the next murder. And wouldn't you know it, we have to go through 5 or so scenes of the casts yakking their mouths off before we actually see another kill. Unfortunately, even the murders aren't that good; given that the killer's weapon of choice was pretty unique, the attacks were never exciting and the build up to them were sloppy. Worse than this was the film's climax and ending, which not only seems farfetched but annoyingly anticlimactic, needlessly open and confusing. 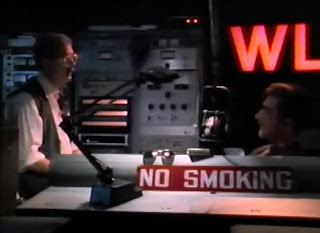 Tone is dull all throughout and the story is really out of focus; one minute we have detectives snooping around for potential suspects, next thing we know we're sucked to a bland DJ's life and hilariously "serious" mental monologues. (I never knew choosing paper or plastic bags during groceries is a metaphor for a troubled existence!)

It's never a bad idea to mix mystery-thrillers with slasher film tropes, especially with movies like Hot Fuzz (2007), Night School (1981) and even Maniac Cop (1988); the trick here is to know the story, set the tone, pace the film properly, and most of all, skills. The brains behind Lasermoon clearly had missed one or two of these helpful reminders and as much as I hate being harsh, the resulting dreck is as boring as watching not only paint dry and grass grow, but both combined while reading the FBI disclaimer at the beginning of those old VHS tapes and listen to your Great Grand Pappy ramble about his imaginary wife.

On second thought, maybe listening to your elderly relative rant about a spouse that never existed may sound more entertaining than this piece of shit. Yeah, better go listen to a Grampa with dementia than waste a single minute with Lasermoon.