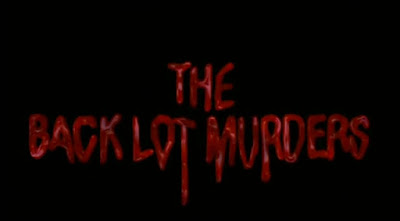 Let's be frank here; we never watch slasher movies expecting high class entertainment, believable stories, or well developed characters. While these are options that can make a slasher film more workable or likable, in the end it's all about bodycounts, imaginative (if not inventive) deaths, and dumb characters getting their just desserts. The Backlot Murders offered most of these with a side of cheddar.

Much like the title suggests, the film is shot at Universal Studio's backlot where a terrible rock band gets their lucky break when their lead singer's girlfriend, the daughter of a record dealer, begged her daddy to help them shoot their first music video. Now with a crew and juggalicious groupies, these hapless singers never would have thought that their gay director and bitchy agent are their only problems; turns out someone in a trench coat and a red-eyed Elvis mask is out stalking and killing everyone in the set one by one. Could it be that one band member that they reasonably fired for being too sociopathic? Or perhaps somebody else with a grudge against these wannabe rock legends?

With cheesy acting, overly simplistic plot, and an abundance of hammy characters, The Backlot Murders is a sort of tribute to late 80s slasher flicks. True enough, while it is not the most intelligent of scripts and likable cast of characters (I will not say they're prude. Just slightly pruder. And dumb.) the film charmed its way to my liking thanks to its unintentionally funny direction and overall quirkiness.

There's also some tiny highlights that I enjoyed personally, like the location of the film itself which made a few prop and premise cameos such as Psycho's Bates house and what I believe is the trailer from The Lost World: Jurassic Park II. Apart from premise cameos, we also have a few good names to shine among the would-be turd of a production; while the film advertises Corey Haim, he's only in a minor role and I instead enjoyed Charles Fleischer (the voice of Roger Rabbit) as the bitchy-flamboyant video director and Priscilla Barnes as the bitchy-stern agent as these two sassed their way through the film with so much silliness on their part that I actually find it hard to unlike their characters. Interestingly, we also got Ken Sagoes (Kincaid from A Nightmare on Elm Street 3: Dream Warriors) in a cameo as a handyman, but unfortunately he didn't last long.

As a slasher, the kills are okay; not overly gory but bloody enough to be fun. What I really like about these scenes is that they're committed by a loon sporting an odd combination of leather trenchcoat and an evil Elvis Mask, with a behavior that comes like a cross between Halloween's Michael Myers and the killer from Urban Legend. At an hour mark, we get an early revelation to who this killer is and without spoiling much, it would have been obvious if it wasn't for a few twists and turns.

There is very little else to say about this film save that it is a campy horror flick. The rest of the production is mediocre but, again, so long as the movie is fun all around, I can overlook any flaws this film is guilty of. The Backlot Murders is bad, but watchable enough for cheese purist.