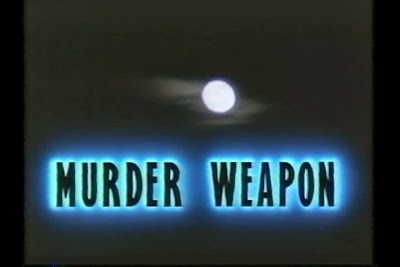 I wanted to hate this film. I really do. But I can't cuz it pushes what I usually expect from a slasher movie and it did just that in the oddest manner possible.

We open with Linnea Quigley's character Dawn going home from...school(?) where she finds her sister making love with a boy. She acts quite casually about this until she strips and decided to murder both her sister and the boyfriend.

This turns out to be a flashback as we now see Dawn being treated by her psychiatrist inside an awfully blackened mental hospital. (budget restrains?) While there, she forms a friendship with another mentally disturbed gal named Amy and they plot a way to escape their captivity by either sleeping with their doctor in order to blackmail them into being released, or simply have the most incompetent psychiatrist treating them.

The plan worked (somehow) and the two are now enjoying life outside the wall and, I guess out of sheer boredom, decided to invite six of their exes to their new humble abode for a party, which turns out to be a terrible idea seeing someone is crazy enough to start murdering the odd bunch.

It is not hard to point out where Murder Weapon fails and succeeds as it is simply all over the place; editing is shoddy and the pacing is muddled, plus the story just failed to make any kind of point. We got all of these red herrings about exes, mental states, and even some inheritance issue that may or may not be the motive for the murders but the way they are incorporated into the story lacked style and simply became nothing more than lines that needed to be spewed out in hopes that some viewers might buy it. Interestingly, the actual slasher portions of the movie noticeably only have male victims, making the mystery of who's doing the kills more obvious.

Seeing how flawed the actual story is, you think this film would be terrible. Obviously it is, but what it lacked in sense and time inside the cutting room, it makes up with entertaining cheese and impressive make-up and practical effects. Quigley's role as one of the potential killers is rather high in camp value and I can't help but simply love her for it. There's a sense of zaniness and fun in her effort that, despite most of the male casts being dumb bollocks lined up for the firing squad, she makes the film all that bearable to watch. (then again, she did produced this. I guess if you're partially responsible for a crime against cinematic standards, you might as well have fun doing it!) The dialogue is so silly it's almost surreal and the direction can be amusing when the time calls for it.

Of course, there's the murders which are, hands down, the film's biggest highlight; the make-up effects are simply spot on when it comes to the gory details. One victim had his face shot off with a shotgun and we see it in gruesome detail, peppered cheeks and tongue hanging out! Some murders may had gone too over the top like the one involving some guy's heart effortlessly pushed out of his chest from the back, but I believe this is where Murder Weapon's cheesy charm made workable.

It shouldn't be a surprise how rare this film is; the VHS box it came with features the two leading ladies brandishing guns, undoubtedly confusing some viewers into thinking they're up to see one of those girls-gone-tough exploitation. Nope, what we have here is a cheesy and gory slasher film with men victims, realistic looking grue, and an ending so wide open it felt dangling in mid-air. If you think curiosity killed the cat, then you may need to prepare mittens as an offering, Murder Weapon is just too weird to pass up and left alone!

Bodycount:
1 female killed offscreen
1 male knifed to death
1 female gets a throat cut (dream)
1 male had his head flattened with a sledgehammer
1 male had his heart pushed out from his chest
1 male stabbed on the neck with a broken bottle
1 male shot on the face with a shotgun
1 male strangled
Total: 8
Posted by Kaijinu at 2:43 PM