Thy Future is Harsh on Thy Throat: Rumpelstiltskin (1995) 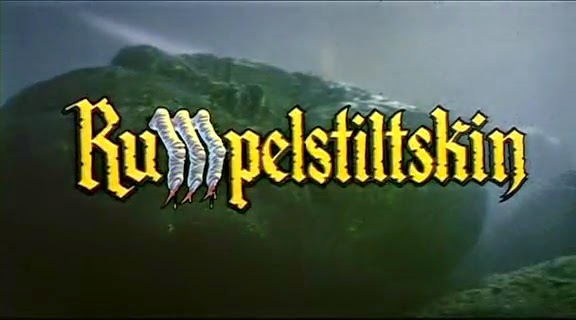 Once upon a time, in a land somewhere in 1400s Europe, the monstrous imp Rumpelstiltskin had stolen a baby from a mother, claiming it as his reward for spinning her some gold from ordinary hay. An angry mob is after him, cornering the hunchbacked creature at the edge of a seaside cliff as they threatened and beg for the baby. He challenges the mob to "bring the pain" and took no time showing off his demonic prowess and killing a few locals.

That is, until a witch stepped in, apparently part of the mob; she casts a curse upon old Rumpelstiltskin, turning him into a stone sculpture and will remain like that for a thousand years, or until a widow with a baby makes a tearful wish. Sure of herself that the odds of exactly that happening are slim, she casts Rumpel-stone-skin to the sea below, hoping it will never reach surface.

Forward to present time Los Angeles, where a stay-at-home wife Shelley was talking to her policeman husband of what they'll name their unborn baby when a mugger decided to commit grand theft auto right in front of the cops. (In broad daylight, if I may add!) Naturally, a shootout happens, and both the mugger and hubby cop bit the dust, leaving Shelley a widow and their child fatherless.

Nearly a year later, Shelley is doing well enough as a single mother but obviously still grieving over the loss; her squeaky-voiced friend suggested that both her and little baby Johnny could use a breath of fresh air and invited the two for antique shopping.

It just so happen that a new shop opened and was selling a vast collection of oddities; one of which happens to be the petrified remains of ole' Rumpy. The sculpture automatically caught the attention of Shelley, opting to buy it despite the warnings of the store's baggy-haired, maybe-a-witch owner that it is not for her.

Obviously, she didn't listen and after hearing that the stone grants wishes, she asked it to bring her husband back once she took the sculpture home. Later that night, her wish was granted (to an extent), releasing Rumpelstiltskin from his curse and is now after her baby John when she failed to say his name that one time.

The rest of the movie is basically a chase story; after escaping her first encounter with Rumpel, Shelley is then chased out of her house and into the road, meeting a TV show host that just happens to be out driving to his cabin in the woods (and later teams up with her cuz he found out he's "good at the whole 'hero' business"), and getting a lot of people in the way killed.

Now, let me make this clear, Rumpelstiltskin is not a good movie. Nor is it an entirely bad one. It is the kind of movie made for people who can tolerate and enjoy films like Leprechaun and have a good time. (Then again, this film was made by Leprechaun's writer/director. Mark Jones, so that should say something)

It's completely fun, overridden with plot holes (like the fact Uncle Rumpy, who never seen a motorbike and a truck, just happens to know how to drive 20th century "steeds") and a barrage of odd characters, Rumpelstiltskin would have been a new franchise to feature a quip-spewing, hunchbacked imp with a vast knowledge of all things modern, which some of us might assume he learned while he was in stone form.

But alas, he never made it to space or the ghetto like Jones' other and more successful monster The Leprechaun; reasons for this might be that the story never got the same sense of magic and foolery as the first Leprechaun movie, as well as dry range of gory kills as almost all of the violence occurs offcamera and/or isn't that exciting enough.

Also, let's not forget the fact that the film features a monster that can be stopped by saying his name; a solution that would had ended this film after 30 minutes if the whole cast just happen to remember how the damn story ended in the first place. The strangest thing about this is that they do know the story, but none of them seem to have the brains enough to remember how the damn princess won her baby!

Still, I find the movie workable as a guilty pleasure thanks to the performance of Max Grodinchik as the titular baby snatcher and Tommy Blaze as the sleazy yet caring loadmouth TV host Max Bergman. If anything, the silliness of the premise and the execution itself was what made this movie worth its penny. Where else can you find a movie that features a chase scene between a 16-wheeler truck and a tiny go-kart? Only Rumpelstiltskin had the guts to do something silly and it was good. (Well, not Good good but, y'know what I mean.)

It's not a movie that pays a lot of tribute to the original fairy tale, but more or less took some details from it and went ahead with its own dealing. The result is a messily horror movie that could use a lot of polishing, especially with the renditions done from the fairy tale, but nevertheless a fun flick to enjoy poking fun and inconsistencies at, particularly if you're drunk with your drinking buddies.