Luck of the Irish. Ghetto style: Leprechaun in the Hood (2000) and Leprechaun: Back 2 Tha Hood (2003) Double Bill Review

Death to he who sets a Leprechaun free. Steal his gold, it will corrupt your soul, you see. For many a moon the legend has grown, death toll increases, solution unknown. Beware the evil wanderer in search of his loot, lest you suffer the wrath of his golden flute. Flee while you can, the future's not good- for no one is safe from a Lep in the Hood! 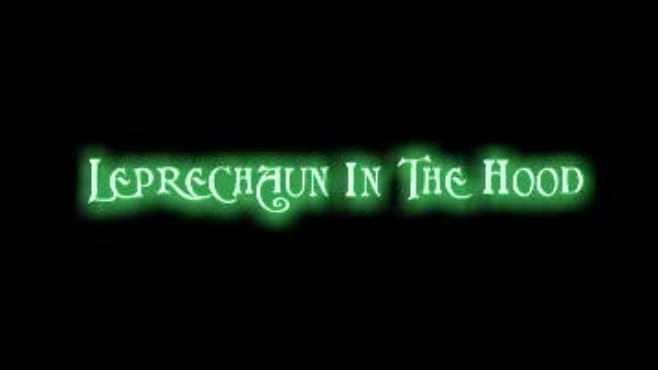 Stepping down from the galactic proportions of Leprechaun 4: In Space around the new millennium, Trimark Pictures teamed up with Lionsgate to bring back the (in)famous titular Warwick Davis monster back from the dead, back to Earth and into a place where we least expected for him to show up at: the hood!

Why? Cuz he'd been in Las Vegas and in SPACE, so I guess Lionsgate just thought "meh, why the f*ck not?" and went with it.

The story, much like any of the other in the Leprechaun franchise, stands on its own continuity and begins with two afro-wearing pimps in the 70s raiding an abandoned building for the Leprechaun's hidden treasure. When they find what they are looking for, one of said pimps, Mack Daddy (rapper Ice-T), appears to be more interested with a tiny golden flute among all the other shinies, so he has his cohort haul up the rest of the loot.

Thing is, next to the pot of treasure is the Leprechaun, petrified by the same worn magical amulet from Part 3. When Mack D's partner greedily takes the mystical jewelry off the statue, he unknowingly frees the Leprechaun and gets a hair pick to the throat as a reward. A "fight" then ensues between Mack Daddy and the newly awakened Leprechaun, most of it involving weapons being pulled out of a 'fro and it ends with the dwarf being petrified again by the amulet.

The action then forwards to the present and amateur rappers Postmaster-P, Stray Bullet and Butch are in dire need of cash for some new equipment when theirs fry up during a rap audition. After failing to sell a guitar with a forged Jimi Hendrix autograph, the trio decided to try getting their rap sold the easy way: by performing in front of the now-successful music producer/pimp Mack Daddy and hope their positive take on rap music will fly.

Adding injury to insult, Mack Daddy had the boys thrown out after telling them that their idea sucks. At this point, Post and his buds agree to repay Daddy by robbing his joint later that night, but makes the fatal mistake of stealing the gold flute and the magic amulet from the Leprechaun statue on display.

As expected, the Leprechaun is free once more and Mack Daddy catches the boys in the act, so that's two troubles for the three idiots. Things head on for the stranger, however, when Post discovers the flute has magic hypnotizing powers and uses it to build up his reputation, all the while running away from both the Leprechaun and one angry pimp. Folks get killed, rhymes are rapped, and the Leprechaun discovers weed. What else is there to say?

Among the two Hood entries of this series, Leprechaun in the Hood retains the horror-comedy of the first four film, but undeniably cheaper and less lively. The reason for this is that the tone doesn't stay stable; some scenes felt like a horror movie, some looked straight out of a ghetto comedy and the magical element is downgraded to simple telekinesis and mind-control, which is hardly impressive seeing the Leprechaun had done better set-ups like electrocuting robots, tricking people into kissing rotating fan blades and pulling deadly powertools out of nowhere.

It's hard enjoying a movie that doesn't know where to focus on, more over when the jokes are mostly flat or forced, the gore is barely creative, and the acting being mostly atrocious. On the plus side, much like the rest of the Leprechaun films to feature Warwick Davis, this was under the intention of making a silly cheesy movie; it's terribly dumb, challenging our intelligence, but it's all for the sake of getting a laugh.

Personally, I'm giving this movie a near-passing rating for the efforts the producers made to keep the mindlessness as fun as ever. I'm not saying they did a good job, but it was a commendable one. 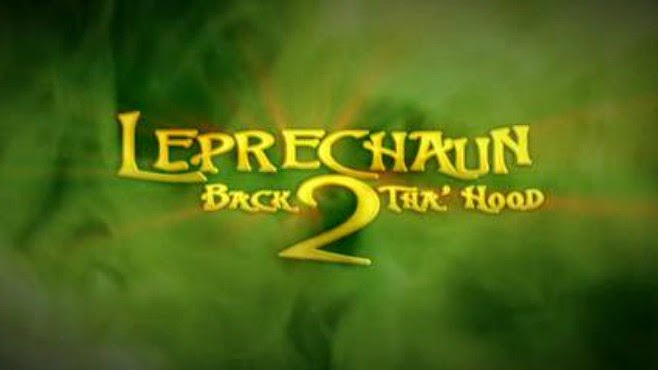 Three years after Lionsgate terrorized the hood (and our screens) with a rapping Leprechaun, this happened. Interestingly, Trimark Pictures sold the right of the franchise to Lionsgate, which means we're screwed right? Well, sortah, but they still could have done worse.

We begin the movie with a brief origin; as it turns out, Leprechauns once served a noble king in protecting his treasures from invaders. Once the king's reign ended, the leprechauns returned to their homes in the woods, save one who grew greedy and corrupt for the gold he was sworn to protect. Fast-forward to the present, a pastor is seen burying in a construction site what we all could assume is the Leprechaun's gold, apparently in an attempt to hide away the accursed object and keep the Leprechaun from claiming more victims. The tiny terror, understandably, isn't too happy about this and demands padre to give his gold back or die.

Padre chooses to fight back and gets clawed to death, but not before casting the Leprechaun to hell by sprinkling him with holy water laced with four-leafed clovers.

One year later, hair dresser Emily Woodrow and her bestfriend Lisa, stoner goof Jamie and Emily's ex Rory are in financial hell; Emily needs money for college, Jamie needs it to pay off some thugs, while Lisa and Rory just needs it for a better and easier life. So when the Emily stumbles into the Leprechaun's treasure that one time they decided to do some outdoor barbecuing at an abandoned construction site, the group is eager to spend their new found wealth. (And apparently for Emily, forgetting her dream of college.)

Unfortunately for them, finding the gold releases the Leprechaun from his hellish imprisonment, now vowing vengeance against those who stole his treasure and death to those who gets in the way.

Something about this film works a bit better compared to the first Hood entry; the way I see it, this movie tries to stray from the random obscurities the first five films have by focusing more on the characters and place the villain in a more realistic ground. Incidentally, the film took 30 to 40 minutes before the Leprechaun gets out, spending all that time building its casts by showing their plight, a little bit of drama, and have them visiting mediums just for the heck of it.

Once the lep is free, however, the movie does the most interesting move I've seen in this franchise; by limiting the Leprechaun's magic to plain immortality, the kills are closer to that of a slasher/monster movie with clawing, dismemberment, and impalement among the fatalities featured. What's stranger is that the sizable killcount is mostly made up of bystanders, with little to none of the main cast being killed off; last time I've seen a movie that relied on death-by-"friendly fire" kill count was the slasher-action-survival hybrid The Zero Boys (1986) and, like that movie, Back 2 Tha Hood did just fine.

So the film is closer to a slasher movie with a more workable story. Good? Not quite; While the new take on the Leprechaun does make him more closer to a weapon-wielding slasher villain, I still prefer magical splatter over hand-made kills since this is what made the franchise enjoyable. I'm also not that fond of seeing my favorite killer dwarf be somebody's punching bag just for the sake of showing how indestructible he is, or the fact that he's just so darn serious in this film. (To an extent)

We got comedy but it didn't blend too well as they all come out as random, like how the Leprechaun just decided to smoke a bong with a dude, get high and get the munchies, or a scene where he gave a fat lady a massage just for the heck of it. They even tried doing a running gag where the lep tries to deliver a scary monologue but only to be cut off coz he's not threatening enough or the victim's too impatient. It would have been funny, but the tone and timing are just off.

Still, I came to like this better than the last Lep in the Hood movie since the positives hold up their own quite effectively. I just wished they worked on the comedy better, or just ditched it halfway as the serious approach was doing fine. Overall, a good flick to remember Mr. Davis' last hurrah as a demonic dwarf! 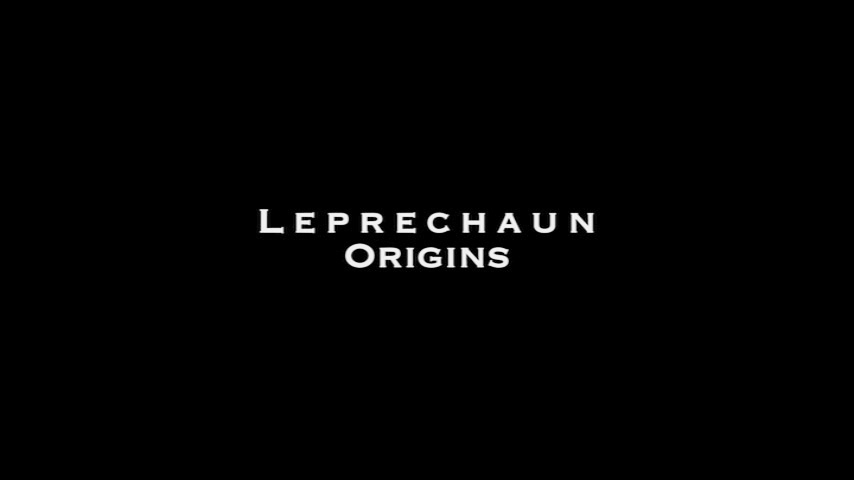 WARNING! THIS IS MORE OF A RANT THAN A REVIEW. LOTS OF CUSSING, SWEAR WORDS, AND SAILOR TALK. I DON'T GIVE A SHIT IF ALL THREE OF THOSE MEANT THE SAME THING. TOO PISSED OFF TO THINK STRAIGHT.

Okay, first, WHAT THE HELL WERE YOU THINKING?! Why buy the rights to a franchise featuring a wise-cracking, demonic killer elf if you're not gonna continue THAT? Why, of all things, would you reboot the series only to feature A FUCKING MONSTER THAT CAN BE OUTRAN BY ITS OWN VICTIMS AND ONLY HAD THE CHANCE TO SLAUGHTER THEM CUZ THE FRIGGIN VILLAGERS, WHO, SURPRISE! IS IN THE WHOLE SHINDIG, HELPED?!

Seriously, this is the most basic monster/slasher movie I've seen in my 23 years (as of this writing) existing in this plane of reality; so fucking basic I figured the whole thing out in 15 minutes! ANY OTHER MONSTER MOVIE IS BETTER THAN THIS! There are no surprises, there are no thrills, NO FUN! Just random cardboard teenagers being mauled alive by a monster that resembles a naked man with a flat nose, pointed ears, and a misplaced jaw. DID YOU JUST READ THAT? I DESCRIBED THE MONSTER FOR YOU. HOW MUCH DID YOU PAY YOUR CREATIVE TEAM FOR THAT?!

And let's not get started with the gore; HOLY, FUCKING, JUMPING JESUS! MAULINGS? ARE YOU KIDDING ME? MAULINGS? I know you're doing a fresh start but, COME ON! THINK CREATIVELY! Oh look, the monster learned to pushed the head of one of the teenagers inside a fucking hole so her friends would mistaken her for the monster and split her noggin open with a fucking axe! Bravo! More to prove that the leprechaun ITSELF CAN'T DO A DECENT KILL! COME ON!

Y'know, it's a good thing I didn't buy THIS fucking movie! Cuz it ain't worth a damn nickle! HOW LONG DID YOU BASTARDS THOUGHT OF THE STORY? AN HOUR? TWO HOURS? WHOOOOOAAAAA! THAT'S REALLY IMPRESSIVE! BRAVO! ENCORE! ENCORE! NO! NO!!!

I would rather watch those two fucking Leprechaun in the fucking ghetto movies than this dreck. The serious approach? Not working. Y'know why the first series is so popular? Because it doesn't take itself seriously! I mean, it's a movie about FUCKING LEPRECHAUNS! How can you guys mess this up?!

You guys better get your act straight and give, not just us fans of the original series, but horror fans IN GENERAL something worth remembering. So far, most your recent horror movie releases sucked. No One Lives? I guess that counts us viewers due to the suicide inducing cliches~! See No Evil 2? Who's bright idea to let those overrated Soska Sisters handle the sequel of your better movies? Oculus? I don't even know what I watched. The Call?

Actually, The Call was pretty good. You guys did well on that one! For those who disagree with me, I DON'T GIVE A SHIT! 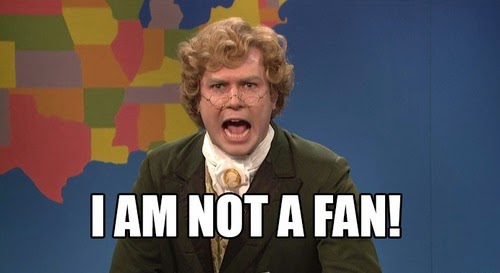