Slitting Up and Freaking In: Innocent Prey (1983) 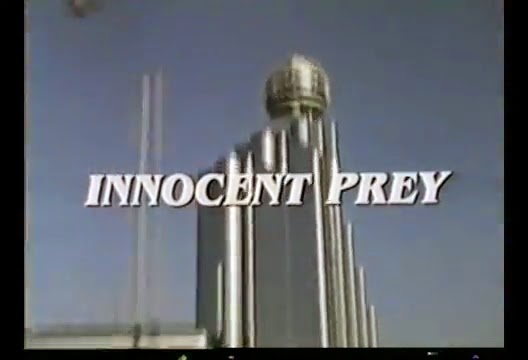 Behind the suit and tie, Cathy Will's husband Joe has a nasty habit of slitting throats when he is in a bad mood. She found out about this the harshest way when she spotted his car parked to a motel one night she dropped her friend off to the airport, and finds him in tryst with a prostitute, slitting her throat in the middle of their passion.

Obviously frightened of her discovery, Cathy called the cops and set-up a bust the very same night, with the men in uniform already waiting outside their isolated ranch to capture her husband once she made him confess his killings. But this only sets Joe deeper into dementia; a few days after his capture, he found the opportunity to escape the asylum he was carted off to and made his way back to finish off his wife.

A few cops got called and killed in a not-so-gory yet acceptable fashion, leaving Cathy to defend herself in your typical slasher film way until her sheriff friend came on the scene and assured her safe. She was for that night as her husband hot foots away, evading capture.

The attack pushed Cathy into flying away to Australia from Dallas, and live there with another friend, but things are far from fine; not only had her husband found out where she moved to, but she also caught the attention of another psycho; the tech-savvy maintenance keeper of the building she is living in, who monitors everything happening in each room with hidden cameras and rigged each door with powerful volts.

Obviously, Cathy's life is messed up from that point on, but the film itself? While it does play with the idea of a woman in peril in such odd heights, I wouldn't call it terrible.

Innocent Prey had a good build-up around its characters, though I do feel that the two psychos were simply there to be menaces in the story and our lead heroine Cathy (played by Halloween 1978's P.J. Soles) does come quite naive at times. Dialogue can be a bit goofy at times but it adds to the playful cheesiness this film was obscuring under the attempts to make the production look serious. By the time Cathy moved to the land down under, it took a breather and gave us some soap-opera hysterics where Soles' character adjusts to her new life. Due to this, it had its slow moments, but director Colin Eggleston of Long Weekend and Cassandra (1986) knew how to build good tension and thrills to keep things interesting while we wait, most of it coming from Kit Taylor's own take as a maddened hubby, and John Warnock as a landlord with a thing for voyeurism and electrocution.

This tone does come unstable at times as some scenarios come out looking over-blown, as if the plot just kept getting trashier and edgier by the minute. Needless to say, the last shot of the movie seems to hint this but it strangely fits the undeniable cheddar that reeks out of the otherwise dramatic twists, more the reason for us horror fans to at least give this bonkers movie a swing.

It's not perfect as you can tell; a lot of elements don't work out but when it comes to low budget and low realism, Innocent Prey thrives from this and if you're the kind who cannot tolerate outrageous character and plot build-up, then you'll be riding with a headache.

Otherwise, if you're the kind of slasher fanatic who can tolerate a good sense of hamminess, this is a movie to add to your collection. I know I did!

Bodycount:
1 female gets her throat cut with a razor
1 male found knifed
1 male knifed on the gut
1 female found decapitated
1 male had his neck snapped, set on fire
1 male murdered, method unknown
1 female electrocuted in a pool
1 male electrocuted on a rigged door knob
1 male pushed through a window, falls to her death
Total: 9
Posted by Kaijinu at 3:58 PM