The Phantom of Texarkana Strikes Again: The Town That Dreaded Sundown (2014) 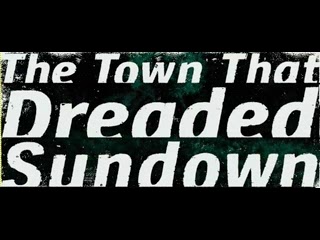 Though I'm not a very big fan of the original Town That Dreaded Sundown (1976), I do pride myself of seeing that piece of camp history well loved, if not respected, by true slasher fans. It was an odd experience, seeing it during my years when I'm (re)discovering the world of slashers for the first time, that weird mix of psycho-drama, comedic cheesiness and slasher film dread being my entertainment for that one weekend afternoon.

Almost four decades later, this name sake came along, a surprisingly well-made film that not only acts as a reboot but also a meta-sequel of its own style.

Set in 2013 in the God-fearing town of Texarkana, it appears that the Phantom has returned 65 years since his disappearance at Halloween night, once again targeting young teenagers in an elusive killing spree. With the entire town rattled, law enforcers from both sides of the state and too some religious groups try their best to prevent any more murders but with the killer as cunning as he was before, the death toll continues.

One survivor of the very first night the murders began, a young high schooler named Jami, decided to look into the murders herself seeing that the killer had chosen her over her boyfriend to survive for a purpose, terrorizing her with creepy phone calls, emails and letters. With the help of her new lover, Jami will soon find out the truth about the murders, both in the past and in the present, all the while trying to survive the Phantom's increasingly violent attacks.

First of all, this isn't a remake of the strictest sense, more of an original story that took a lot of elements from the original Town as well as using that very film as a red herring of sorts. Quite a nice craft if I say so myself even if the plot of using a movie prior to its sequel or remake as an in-world element had been done a few times before, most notable (and notorious) being the story for The Human Centipede 2 Full Sequence. What made this film's take more unique was that it perfectly balanced out the fictional setting of said in-world movie with what's best described as looser story based on the real-life historical killing spree, resulting to a film that's both respectful of the movie it was based on and an original slasher of its own. This said, much of the horror element of the new Town was closer to that of a true slasher, with the sex=death cliche taken to a literal sense with a bit of zealous and, on one kill, homophobic take, each murder cruel, bloody and incredibly intense. I also took notice of the film's tone, which is gritty in an exploitation kind of sense, all the way down to the watered-looking yellow tint picture, the town's oddly 70s inspired backdrop (from the clothes to the vehicles, despite taking place in the 2010s) and stylized retro camera shots, elements that worked quite well for a remake tributing the original.

Of course, this kinda became an issue for those who're an avid fan of the 1976 film; what made the original Town frightening was that it had a sense of realism despite some of its cheesier parts thanks to its documentary-like take as well as being made and released years closer since the original killing spree. The 2014 Town is clearly a movie made from one's imagination, made to thrill the public and entertain horror fans, relying on suspenseful stalkings and gored-up killings. Not really a bad thing since it did cater enough to stand on its own too feet without relying too much on people recognizing the movie it was remaking; in fact, since the original Town is a red herring frequently shown through out the film playing in a theater or two, it kinda advertises it and plays around with the notion of what was fictionalized and what was not. The acting delivers a lot better compared to the the original as well, which helped the film drive through parts where it needed to slow down to focus more on the investigations, both amateur and not, dwelling down to a cliched twist ending that could have been a lot longer and engaging but nonetheless satisfying.

The Town That Dreaded Sundown (2014) is a slasher that deserved to be warmly welcomed by fans of the original and those who're looking for a worthwhile remake/sequel these days. While it isn't scary, it is stylized and engaging, a combination that makes any cliched horror movie a fun ride.