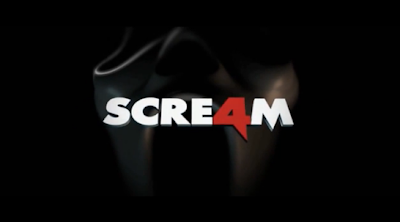 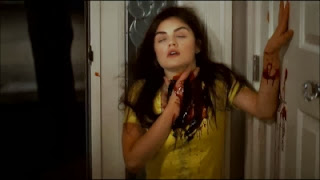 With today's obsession with remaking classic horror films, bringing back Scream after its supposed finale ala trilogy is one way to poke fun at it. Albeit unnecessary.

Neve Campbell returns once again to reprise her role as Sidney Prescott, now an adult, a writer of a bestselling self-help and is currently on her last stop of her book tour, which happens to be her home town of Woodsboro. A night before her arrival, however, a couple of girls were brutally murdered by someone taking the torch as the new Ghostface; Gail and Dewey, married and living a strained life in a small town, were first on the scene and finds out that whoever did it had placed their get-up inside Sidney's car, a mock welcoming gift to celebrate her return and the Woodsboro Massacre anniversary. Once again targeted by a deranged costumed killer, Sidney has no choice but to tag along again and try to stop the killings, which so happens to be targeting her young cousin, Jill, and her friends, with the help of some familiar faces, and too some new ones. 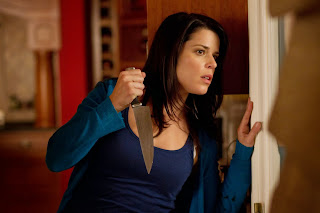 I wouldn't really this a re-boot, or a remake, or whatever you call it these days, but it did re-hashed and updated some certain Scream set-up, like the big opening kill, and a hyped-up bodycount that finally embraces cliche. In fact, out of the franchise, Scream 4 boasts the highest and most brutal kill count, going as far as a two digit count and some nasty knife slaughtering. This, however, shows the film's weakness in terms of direction, following a routine of call-show-kill-repeat as targeted victims first receives a call from a killer (or someone pretending to be the killer) before being attacked and gutted alive. Once you get the set-up, you can pretty much tell what's gonna happen next, and with most of these victims even that developed, it's almost empty in comparison to the previous entries. 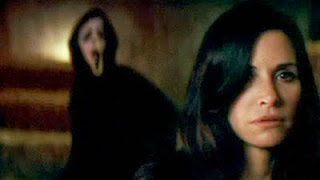 Still, Scream 4 is still a Scream movie at heart; Kevin Williamson returns to write for this entry after handing it down to another in Scream 3, bringing back the much loved satirical dialogue and name-dropping this series is known for. The entry's decade long hiatus certainly gave it an opportunity to take stabs at every wrong and right about today's horror with much nostalgia from the original, thus the return of another smart script and some well-deserved plot development, done right with oddly placed humor. Wes Craven also sits again as director and surprisingly remains as cool and calculated with the film's flow and direction, a relief seeing how badly messed up his prior work to this was. Seriously Crave, what happened in My Soul to Take? That was horrible!

Casting-wise, while Campbell, Cox and Arquette remains enduring and consistent with their character's personality (well, sort of. Dewey lost some of his awkward puppy-dog charm since the first. Ah, the horrors of growing up), some of the new faces here are likable enough not to be overshadowed by the veterans; Emma Roberts is Jill, Sidney's naive and slightly vulnerable younger cousin who may stand in as the killer's "remake" version of the lead Prescott, portrayed with much troubled innocence and sweetness. Tagged along with her is Hayden Panettiere as the aggressive yet true-to-heart horror geek. She doesn't have much scenes around the film but whenever she's around, she does shine. Joining some of these few countable memorable heads is a couple of film geeks portrayed by Rory Culkin and Erik Knudsen, this version's "Randies", active members of their school's film club and proprietor of the town's annual Stab-a-thon. (Where kids get drunk watching a marathon of Stab films, the series' in-movie slasher franchise) They were awkwardly funny whenever they're on the scene, and even if they're far from replacing Randy, they had a good run. 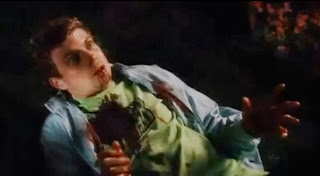 These two set of generation soon melds in one satisfying climax on where the franchise's well known outrageous twists was once again put to good use, shocking fans to yet again another twist reveal that no one saw coming, with a social commentary on today's violence-obsessed media to boot!

A bit clumsy yet still entertaining entry for our generation, Scream 4 shows us that the franchise still has a long road ahead, and with the right mindset, they can do it right. But does this mean we are rooting for more Scream any time soon? Well, as long as Ghostface doesn't do time travel or find himself a Bride, I guess we can for another round or two.

*Questionable
Posted by Kaijinu at 4:35 PM