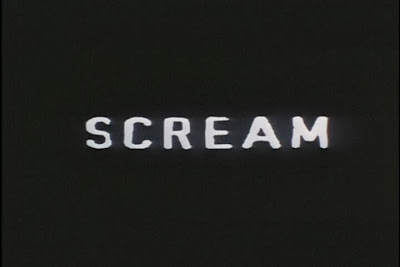 By the late 80s, mainstream slasher films were nearing death, with just a few titles left alive trying to keep the torch warm and bright. These movies are no more than rehashed sequels, shot on video atrocities and other mini-budgeted obscurities and while some of them did made a name for themselves such as Dr. Giggles, Maniac Cop and Popcorn (1991), others like Demon Warrior (1988), Blood Lake (1987) and Iced (1988) may knocked the genre back a step or two with their obscurity and tired formula.

It wasn't until around 1996 when the genre found a new voice; through a little title by Wes Craven (the only guy I know who made slasher films that tries not to be slasher films) simply called Scream.

We got, first, the infamous opening; Drew Barrymore stars in a cameo appearance as a poor blonde who finds herself a victim of a deranged caller, threatening to murder her and her boyfriend if she fails to answer their trivia quiz correctly. After a few successful rounds, she unfortunately slips a wrong answer (involving Jason Voorhees's franchise), costing her boyfriends life. Sickeningly, the killer gives her one more fighting chance to get one right, but this turns out to be a ruse when our star killer, Ghostface, finally appears and gives a brief chase. Soon, he catches up with his target, all the while the girl's parents are driving back home, unknown to them that their daughter's being murdered right under their noses and eventually finds her hanging on a tree, gutted.

The news of these killings inevitably breaks out the next day and reporters of all shapes and sizes begin filling up the street as they try to get the latest scoop. Caught in this circus is one Sidney Prescott, who's still coming in terms with her mother's death just a year ago. As her father leaves her alone for a business trip later that night, she finds herself targeted next by the killer. Barely escaping when the cops finally arrived, Sidney later suspects her boyfriend Billy of the crime after he appears just moments after Ghostface ran away, with a phone found in his possession with her number dialed.

This, unfortunately, was a all a coincidence when the real killer phoned again no soon after Billy was arrested. Now with her boyfriend upset over her accusations and some of kids from her school taunting her of the mistake, Sidney finds herself alone with the problem she's about to have when the killer starts appearing in her school, intent on finishing what they started.

With the attacks becoming more constant, the school staff has no other choice but to suspend all classes until the killer is caught, something the wilder bunch of the town teens see as something to celebrate by going to a secluded house near the woods, getting drunk and watching horror flicks. Of course, Sidney and her gang is attending it as a mean to lay off some steam (and for our lead girl, mend some broken hearts) but what's not made aware for them is that the killer also found out about the party and finds it as the perfect set-up for his own horror movie finale.

Although the pretext of self-awareness isn't entirely new to the sub-genre, as titles like Evil Laugh, Blood Sisters and even Friday the 13th's own Jason Lives had a character or two who obsessing over slasher clichés and made their own observably witty quips. None of them, of course, used it as a theme and focus for the entire movie as this little masterpiece did, somehow saving the sub-genre from direct-to-video mediocrity. Satirizing slasher flicks with hip and trendy self-awareness to the clichés usually found in this genre, Scream is a mad dash hybrid of whodunit mystery, teen drama and some fine slasher-inspired killings, resulting to a smart yet seemingly traditional dead teenager movie that warmly sits with its kin.

This new angle had given an opportunity for the movie to deconstruct itself and see all the tropes that it could avoid. True enough, the movie is devoid of gory kills, gratuitous nudity (only one sex scene and it's simply implied!) and exploitative situation, instead focusing on its characters and how they react in a bizarre situation with much realism and knowledge to the films they're supposed to be in. Yes, while some clichés are unavoidable, such as the twisty reveal made at the end that seems plausible but too well-thought, it's usually made for laughs.

The choice to cast TV stars as our victims and suspects to be could count as a win-win element for the production and the target audience then; while director Wes Craven could had random teenagers from B-flicks appear as mincemeat, casting someone familiar for the "Dawson's Creek" crowd could reel in a good number of ticket sales and, miraculously, it did. Originally, Drew Barrymore asked for the lead role as Sidney Prescott, but had to decline due to a previous commitment she had made, leaving Craven to choose Neve Campbell from "Party of Five" to star as our troubled teen (like you and me. Or rather, past you or me), just struggling not only to move on from her mum's rape-murder, but also to survive what seems to be a threat that could be anyone behind a mask.

Barrymore was still given a role, though now as a minor character, yet her presence in the project somehow allowed the production to draw in some big names in the entertainment business; Then FRIENDS cast Courtney Cox took the role as Sidney's exploiting reporter rival Gale Weathers in hopes of changing her good girl status on the TV series, Skeet Ulrich from The Craft (which also starred Campbell) took a stab again in the horror genre as Billy Loomis, Sidney's boyfriend, and Jamie Kennedy from the post-modernized Shakespearean Romeo + Juliet as the movie geek Randy Meeks being the few names taken in by the film, plus a couple more almost drawn into the project, such as Rebecca Gayheart and even Brooke Shields. (Though Gayheart returns for the production of Scream 2, as another one of Sidney's new clique)

The original concept of Scream was that of a basic slasher film involving a woman alone in a house, to be terrorized by a loon, a story by screenwriter Kevin Williamson that was inspired from the crimes committed by serial killer Danny Rolling, AKA The Gainesville Ripper. While some of the original draft points still remains, such as the home invasion opening and the fact that our lead's mother was raped and murdered, the draft was more brutal and messy, including a more detailed disembowelment of a character. Cuts and re-writes were made to tone down the gore and violence in order for it to be bankable for the time being, as big studios back then didn't find horror films as sellable to the public; the result, however, was a more developed story that appears practicable enough to be made.

Originally titled as "Scary Movie" (Kinda answers where a certain parody got that title), the draft would go through moments of development hell until Dimension Films picked it up from an auction, and tagged along Craven to direct it. Though the director, at first, turned down the offer, being committed on moving away from his persona as a horror director all the while ironically working on a remake of The Haunting, he soon took a shot on it and sees it as something entirely different from the kind of horror he had been making, which is honestly, almost all of them being slasher films. (Don't deny it people, Deadly Friend and Shocker had slasher written all over it.)

With a lengthy running time and almost no grue, Scream harkens something new to the public to answer their craving for horror, in turn saving slashers from being obscure. Albeit not entirely perfect in every way, its simply a matter of taste to whether the new approach is workable for the audience or not; majority enjoyed it, I simply find it as an entertaining new age classic, but for those who wanted for gore rolling down between some guy's legs or a less funnier looking get-up for their villain (let's face it, after Scary Movie, Ghostface looked a little less threatening), then this late 90s bodycount flick might be a different matter for them.

Still, for mad dash slasher fanatics like you and me, Scream deserves a good looking; whether you'll love it or hate it, you can't call yourself a slasher fan without seeing this lil' savior at least once.