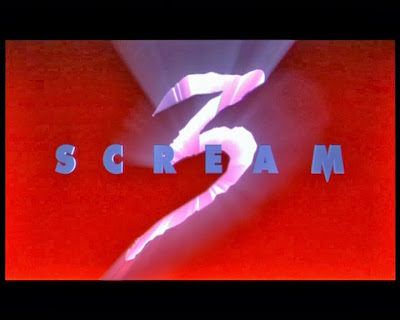 Oh-kay. Adding to my list of personal-unexpectedly-likable-sequels-that-nobody-else-seems-to-think-so is this here Scream 3.

Yes, I do get that it's the most tiresome and outlandish entry of the franchise until Scream 4 came around and gave us a cop who took five steps before dying from a forehead knife wound, but you just got to love the charm of a good "bad film" that finally embraces its identity as a slasher flick.

We open up with yet again another obscene caller harassing a victim; for this entry, it's Cotton Weary, three years later after the events of the last movie and now hosting his own talk show. After a few verbal threats to Mr. Limosine here, we then cut to his home where his lover is attacked by none other than another freak in a Father Death get-up (these things just don't run out, do they?) After a few brief struggle, the lady in black lingerie managed to run and lock herself to safety until Cotton returns to see if everything's alright. She attacks him, believing he is Ghostface unmasked, but of course this accusations turn out wrong when she gets the bladed end on her back, right before our costumed killer turns his attention to the wounded Weary and kills him. 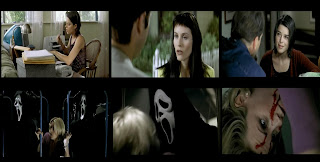 Elsewhere, we find out what our three remaining recurring stars are up to; Neve Campbell is still Sidney, now hiding deep in a Californian backwoods as a tad of shut-in and operating as a dial-in crisis counselor; Courtney Cox is still Gail Weathers, an anchorwoman now working in a sleazier tabloid show; and lastly we got David Arquette, still as Dewey, now working as a consultant for the last entry in the in-movie slasher franchise Stab 3, based on the "Woodsboro Massacres".

It's the last days of the entry's filming in Hollywood when things began to shake up again in a wrong way as someone began offing the casts, one by one, in the same order as they're bumped off in the film's script. Even curious is the fact that the killer is donning the Ghostface mask. Believing they may have another film-obsessed psycho running around killing people, Gail and Dewey meet up in the set with hopes of stopping the spree before it gets worse, even if it means (once again) bickering with one another for some things they did to hurt each other in the past. Comically, this puts Gail in a sillier situation when the actor of her fictional counterpart in the Stab series decided to butt in and try to be a better snoop than her.

After mustering the strength to face the past and threat once again, Sidney also joins the investigation; she soon learns however, along with her friends, that her past might be more complicated than it looked, and it might hold a key on identifying who the killer is. 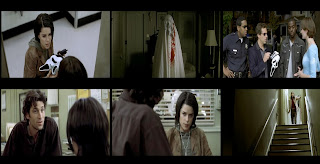 On a very personal note, I mostly prefer sequels that can be enjoyed on their own over those that relies too much on a continuous story that you have to see the previous entries just to understand everything, hence why I'll always prefer movie series like Friday the 13th, Halloween, A Nightmare on Elm Street and even Texas Chainsaw Massacre, over epics like Lord of The Rings and Harry Bladder. I mean Potter. Yeah, let's go with Potter...

While the first two Screams tried to keep a grounded realism to its plot by keeping the in-movie jokes and dialogue as witty and justifiable as possible, Scream 3 had given more emphasis on humor with varying subtleties. This approach was met with mixed feelings from both critics and fans alike, and as much as I do find the comedic angle funny at most, I do understand why; the first two of the series tries to avoid the clichés and pokes fun at it, which could count as a mocking yet smart nod to genre fans alike. Scream 3 is a step away from avoiding these tropes and one more to just plainly accepting it, meaning a less sharper script that didn't quite capture the same level of satire as the ones written by Kevin Williamson. (He gave the treatment to another writer, Ehren Kruger, for re-writes) Incidentally, when the film was being made, the infamous Columbine High School Massacre was the hot topic then, thus would explain why a change of tone is needed; humor is taken a higher priority, forcing the film to draw away the gratuitous gore, to avoid a bad public eye as another round of " media witch-hunt" was at hand when those two gun-totting freaks puts the blame on horror films for their action. Wusses.

Thankfully, the violence has stayed, still, and the kill count is higher than the last. Not very gory, or imaginatively elaborate, but they did try to vary away from the classic knife stabbings and throat cuts. Victims to these atrocities were, sadly, worse than the last bunch we had in Scream 2. Paperthin with some barely uttering a word, they're basically just meat for the slaughter, added along to heighten the count.

Nonetheless, I love it all through out; it's relaxed, manageable, didn't took itself too seriously, it's everything I always look for a good popcorn-friendly horror flick. The best scenes had to be when the Woodsboro finds help through a tape made by their late friend Randy Meeks, who's last encounter with a Ghostface killer had his throat cut (and fans crying over his grave), giving them helpful tips in surviving a horror trilogy. It was perhaps the warmest moment of the film, the original draft was to have him alive, apparently surviving his attack and was sheltered away by his folks to avoid in getting him in anymore rough-ins, but director Wes Craven thought it was too unlikely. (I kinda agree. No one can survive a throat cut that long)
Some other horror elements are also thrown in, such as a supposed haunting of Sidney's late mother. It didn't work as well as they planned to, but it's quite refreshing if not slightly cheesy. I also find the plot's duo-mystery to be quite interesting and love how both had somehow merged in the climax to give us the franchise's biggest and twistiest reveal yet! And the fact that this was supposed to be the last film of a then-planned trilogy just adds the charm of a big finish.

Albeit many will still see this as the worst, if not just plain trashier, round for the series, I stand my ground with the minority once again when I say this is far better than what most critics and fans alike had made it to be. (Just like how I stand firmly on my ground when I claim Halloween H20 and Ichi The Killer is overrated. Yeah, you heard me. You got a problem?) As a simple, raunchy and messy slasher flick, Scream 3 almost works perfectly along a few small bumps, but fans alike and slasher enthusiasts should definitely give this one a chance.