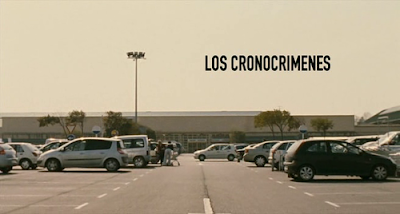 I may not be a big scifi fan but I am willing to try a few titles so long they're well worth to sit through and it doesn't get too confusing with its many plot twists and scifi babble to the point that I'm lost and snoozing on a theater seat. Or a couch.

Now, if said movie mixed in some mad slasher antics, however, I can guarantee that it will have me baited but still keeping an open mind as pulling off a scifi horror hybrid that revolves around a trope-filled subgenre such as a slasher can be tricky; while many easily did this by exchanging fleshy humans for robots (HARDWARE (1990) and Chopping Mall (1986)) and aliens (Alien (1979), Without Warning (1980) and Almost Human (2012)) for killers, or lazily chucking slasher anti-heroes into a scifi setting (Leprechaun 4: In Space and Jason X), sometimes we have people like director Nacho Vigalondo trying a more grounded scientific exploit, which is the major plot point of this ingenious thriller. 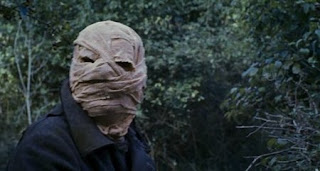 Hector is a bored husband who's moving in with his wife to a new home comfortably tucked near the woods. After being spooked by a silent phone call, he decided to pass the time by testing out his binoculars, spotting a radio tower and a girl who's currently stripping. Obviously thinking this is beyond ordinary, his curiosity leads him into the woods, looking for the nude girl but only to find her passed out against a rock and that he is not alone when a man with pink bandages covering his head stabs him with a pair of scissors. After a chase through the woods, Hector sees salvation in the form of the radio tower he spotted earlier and upon approaching, a voice from the building helps him get in and instructs our hunted man to hide from the killer inside a large container filled with white liquid.

When he re-emerges, Hector finds himself exactly an hour earlier from the events involving the bandaged man, spotting his earlier counterpart and learning through the young scientist working in the radio tower that the container he hid in is actually an experimental time machine. Despite the man protesting Hector to stay put and let the events play itself, Hector nonetheless ventures out of the lab and will soon figure out the consequences of damaging the loop of time. 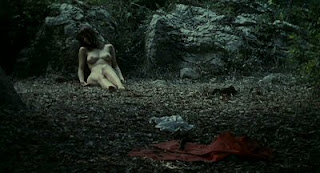 Timecrimes (2007) is a swell flick that makes you think on how one same event will play out through different vantage points of the very same person and how desperate a situation can get considering it is something beyond our control. It craftily plays with this idea and despite it's lack of any real depth or meaning, it is surprisingly entertaining nevertheless.

Plot holes are, not surprisingly, present but what makes this thriller a bit different from your other time travel movies is that it dwells into the darker realm of the fictional science theme, tackling the subject of sacrifice and devolution of one's personality whenever the scenario comes to play, quite an extravagant theme that could overlook any flaws in the story without being all too complicated itself.

Told true, the limited settings and characters make this story simple yet intriguing; the movie is vehicled by Karra Eljade's workable role as Hector, an average man plunge in a not-so average situation that, albeit being a person that's not too likable, you do get to feel for his plight as he tries to piece things together. There are other casts (including the director himself as the young scientist who does his best to help his estranged subject) and these good folks play their respective roles strongly enough, but are slightly overshadowed due to the film's focus on Hector. The "slasher" aspect of the film, interestingly, wanes the further the plot goes, beginning in full force before completely disappearing as the later parts become a situation/character study. 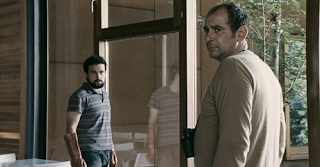 Timecrimes is a scifi film that is accessible in its lack of over-complicated twists, yet promising every possible small detail will hide a higher purpose. It's the best of both worlds and it's often hard to come by of such a film that perfectly balances itself. May you be a horror fan, a scifi geek or a plain movie lover, this thriller definitely offers an excellent viewing.

Bodycount:
1 female pulled off from a roof, fell to her death.
Total: 1
Posted by Kaijinu at 8:22 AM