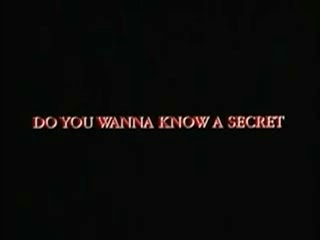 Waste my time with a bad movie, I say. Who knows, maybe I'll like it, I say!

Why put myself through it, even? Experience? Well, there's that, but after spending an hour and twenty something minutes with this movie, I highly doubt I want to keep said "experience". Here's why:

The plot has us looking into yet again another group of partying teens in Spring Break, offed one by one by a cloaked killer with a ridiculous-looking mask (E.T. knows where you live!!!) who keeps leaving a message for the rest of the kids to find: Do You Wanna Know a Secret? Honestly, I don't give a flying feather what it is if it takes 40 something minutes into the film before anything interesting happens, but it may have something to do with a friend of theirs that was axed a year ago.

But seriously, no one in here deserves my attention; they're plain rowdy teens who want to party until the end of time (or the end of Spring Break. Or of their life. Whichever one goes first), feeling barely any remorse for their dead buddies. For all it's worth, I would really want to see these kids die off in an entertaining manner just to make up for their lack of character and yet the film fails even to provide that, leaving us with cheap throat cuts and criminally high count of offscreen kills.

What's worse than dull characters and murders? How about a plodding direction? Or a lame-as-ass twist ending that's hardly even inspired? The kind that makes you roll your eyes and shrug in disappointment that these guys can't even make up a good reason for their killer to be chopping off heads so they have to rip one off from another movie. (Mortuary (1981) anyone?)

Yes, this is barely a functioning slasher for my standard and it deserves to be forgotten into non-existence. Do You Wanna Know a Secret? No. Wank off, movie!