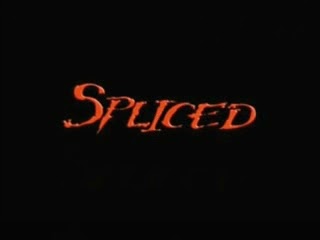 Funny how a film you obsessively watched during a phase from your childhood can sometimes turn into something less worthy of  your obsession by the time you re-watch it with a more experienced understanding.

Take Spliced for example, a low brow "slasher" movie about Mary, your average horror fanatic with a severe sleepwalking issue that always end up her screaming wide awake on the streets in the middle of the night. Her dad thinks the cause of all this is her unhealthy obsession for fright flicks but Mary, of course, thinks this is just a load of bullcrap, so much so that she decided to go out one night to see a box-office slasher called The Wisher, much against her pa's wishes. (See what I did there? hehe)
Unfortunately, tragedy strikes when pops swerves into a car crash on his way to get her off the theater. Six weeks after the incident, a guilt stricken Mary begins to see the same ghoulish character from the last horror movie she saw and it is somehow making some of her wishes come true in a grisly fashion. (Want a day off from school? Arson! Want a friend to shut up? Tongue cut off!) It's not too long before Mary gets really suspicious and starts dwelling into the film one last time, hoping to find some answers before the death toll gets any higher.

I like the idea of wish-related slashers ever since I laid eyes on the first Wishmaster movie back when VHS was still popular but making one work with such a meager budget can and will always be challenging. Spliced certainly got a great plot but the execution was less than exciting as more satirical stabs where done through cheesy dialogue than actual murders, putting up a kill count so low it's criminal. (Harm Count's pretty high, though. Perhaps it deserve a few points for that?)

If anything, Spliced wanted to do a more thought out look into violent horror movies and their effect on mentally unstable people who obsesses over them. We all been there and we should be able to relate to this, but the film's tone and budget fail to help improve this matter and it instead bore the heck out of us with lame twists, cheesy cliches and an underdeveloped story and characters. I could give some points up for the killer's awesome get-up but anything else is beyond passable.

Nothing really inspiring from this. Give it a shot when you want to waste some cable TV time.