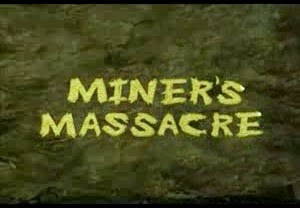 From the director that brought you the atrocious cult film Troll and gave Jason Voorhees a new kind of blood to slay in Friday The 13th Part 7: The New Blood, comes this rather ordinary slasher that still brought out the goods.

After discovering some gold buried in an old abandoned mine, a young digger is suddenly murdered by a recently revived zombie miner who obviously have no liking for anybody touching his treasure. But unknown to this undead killer, the man already called out to some of his buddies and informed them of his find. Now coming to collect their share, these teens will soon find out what awaits them and eventually be fighting and fleeing for their lives.

Not much to say about this film apart the fact that it's workable as a rented video for a boring weekend night. (Then again it was released in video so, purposed served?) The production looks pretty nice for a DTV release, but as of any slasher, the story's paper thin and barely inspired, having characters with little chemistry due to some weak scripting and just-passable acting.

Thankfully, there's blood and decent kills all through out, plus I really came to dig (pun) the cool concept of  having a murderous old western miner with a greedy (if not homicidal) streak for his gold. The pacing's well directed and the cheese value is entertaining otherwise, enough to overlook bad acting and overdone killer motives any day.

Miner's Massacre is obviously flawed with the same cliches and thespian trappings that made this horror subgenre look stale for the more sophisticated movie goers, but for the right kind of audience, this cheap and cheesy slasher did everything a hack and slash movie should be doing with a heart and should be praised for at least trying. Not bad for a video release, definitely worth a rent or for keeps.