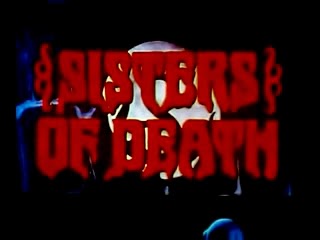 It all began with an initiation involving what looks like a fake gun being shot over the heads of the new pledges to test their trust and loyalty. That was until they found out that a live bullet was inside one of its chambers and shot one of the pledges dead.

Seven years after the incident and after these girls drifted apart into their own lives, they're all mysteriously invited to a reunion. With an additional promise of $500 to pay for their expenses, the girls soon catch up and find out about the sinister truth about their invites: revenge.

It's no mean a traditional slasher as while the premise of trapped girls being bumped off one by one by a killer sounds promising for a bodycount film, most of the classic trappings of the sub-genre are missing in Sisters of Death. There's no need for POV shots since the killer is identified no sooner as the host reveals himself as the father of the murdered girl halfway into the movie and the killings begin only after since. Odd enough, this movie makes me wonder to who it's aiming for as everybody here are hardly believable in a cheesey-corny manner; normally one will try to outwit and find a way to survive a loon but one of these girls finds the time to take a shower or thought it'll be a swell idea to spell "SOS" in the middle of a desert. (Yes, the latter does sound like a good idea but judging of the size of the sign they made, I really doubt anybody will notice it) It's like these casts are begging to be killed and apparently ole' pap knows this cuz he is confident enough to spend some of his onscreen time making bullets and practicing his flute solo. (that last part wasn't a joke)

Can't say it's going to impress hardcore slasher fans too as majority of the kills are bloodless and some are even done off camera. It did use some good atmosphere that goes well with the movie's 70's grit but honestly, this is a relatively little praise compared to the number of flaws Sister of Death spat at us. Unless you prefer to enjoy bad movies for flaws' sake alone, this is hardly the kind of bad drive-in cinema you should be hunting for. Better off watching the original Texas Chainsaw Massacre (1974) than this dry dreck.

Bodycount:
1 female shot on the head
1 female strangled with a cord
1 female found stabbed on the back with scissors
1 male electrocuted on a rigged fence
1 female bitten by a rattlesnake
1 female shot
1 male shot and fell to his death off a window
1 male shot
Total: 8
Posted by Kaijinu at 6:31 PM