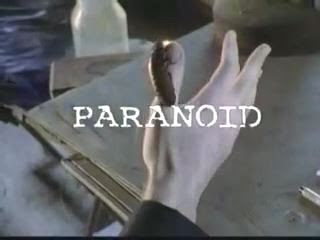 Paranoid (2000) (AKA "Frightmare")
Rating: *
Starring: Shanda Lee MunsonSummer Sloan LaPannBrandon O'Dell
As of writing, it's the month of October and I'm kinda regretting covering most of the good Halloween slashers early on this site's creation as now I'm stuck with nothing to review but these degrading D-Grades that I'm sure most, if not no one would even bother with. On the plus side, though, the sooner I get my thoughts out about these cruds, the sooner I get to boot them out of my system. So here be one of them, a messy murder mystery going by Paranoid (2000). (Or "Frightmare" in some releases)

Opening with a girl heading home from a gym, we get our first taste of blood when after getting stalked by some dude with gnarly long hair, the girl discovers her parents were already murdered in their home by the same stalker who then proceeds to rope her up between trees and guts her open with a knife. Word of this crime spreads quickly all over town, reaching one high school wannabe-journalist Sarah, who cannot help but recall the death of her own twin sister at the hands of an infamous serial slayer known as the "Conscience Killer".

Things get hairy real quick when Sarah and her friends, done for the night after working on a Halloween funhouse, stumbles upon an abandoned building while on their way to a party. The abode, of course, didn't turn out to be completely abandoned as not only did they find some items inside that looks and feel mighty suspicious, but they also got chased out by a masked loon with a chainsaw. Believing they just found the hideout of the Conscience Killer, Sarah tries to convince her friends and local authorities the seriousness of the situation but, seeing each of them has bit of a reputation around the community, they weren't taken seriously.
But as these things tend to go, someone starts killing random people and Sarah thinks its the Conscience Killer trying to find her and her friends to cover loose ends. Could she be right?

Well, I would have cared more about this movie's little mystery if everything wasn't so stuffed up with low quality cheese and lackluster storytelling. For a slasher, there's more melodrama talk and dangerously wide plot holes here than thrills and spills and that just makes Paranoid (2000) a very unrewarding experience of a horror flick. Granted that the actors did their best to make the best out of the cheap-as-chips scripting, its plot still drags on to the point of a lulling stalemate with little to reward our patience, made worse by its horrid editing and unexciting (mostly offscreen) murder set-pieces.
To simply put it, fuck off, Paranoid (2000)! It's low-budget filmmaking done sloppily, better off collecting dust in some shelf than tainting one's brain with its very existence.
Bodycount:
1 male and 1 female found murdered
1 female gutted with a hunting knife
1 male and 1 female murdered with an axe, bodies later seen splayed
1 female murdered with a knife (flashback)
1 male stabbed and slashed to death with a knife
1 male stabbed in the chest with a knife
1 female found murdered
1 male axed on the chest
Total: 10
Posted by Kaijinu at 10:27 AM