A low-budget slasher franchise about a Halloween-themed killer kid? Offing people?! On Halloween?!?! Eh, sure, why not?

Black Pumpkin (2018)
Rating: ***
Starring: Ellie Patrikios, Matt Rife and Grayson Thorne Kilpatrick
Years ago, on Halloween, a local sheriff and his teenage daughter were murdered in their home and though the killer was never caught, they did left a calling card: a black pumpkin.

Fast forward ten years later, two kids, Elliot and his best friend Porkchop, are filming a documentary about a local spook spot known as Diablo's Den for their school project, a place known for being the setting of "pretty much every tall tale and campfire story" from their town. Their presence, unfortunately, awaken something that terrorized their little burgh before, a local boogeyman named "Bloody Bobby" who many say was the ten-year old kid that vanished into the woods of Diablo's Den back at 1988.
As people start being killed by “Bloody Bobby”, it's only a matter of time before the killer tyke makes his way to the two kids that brought him back, all the while local crazy Alex Griffin, who lost his brother at the hands of Bobby, tries his darnest to warn everyone of the little boogeyman's return and end the nightmare once and for all.

Black Pumpkin (2018) can be best described as the love child between "kid-centered" horror vibe ala The Monster Squad (1987) or Monster House (2006) and gorily shlocky supernatural slasher mayhem, done in that cheapjack B-grade filmmaking job that would either leave you giggling or groaning at how cheesy it can get. It's hardly scary with its less-than-stellar acting and cookie cutter plotting, not to mention its bargain price editing and uninspired score, but the film does have that macabre playfulness lingering around in terms of tone and the scenes wherein little "Bloody Bobby" is just doing his murderous deeds are just fun enough for how practical they're done, giving this messy treat at least a pass for its effort.
There isn't really much else to say about Black Pumpkin (2018), frankly; it's a low-budget bodycounter with a hammy heart of a kid who grew up in the late 80s or early 90s and that's more or less it. It's definitely not for everyone, but those willing to give this a try are welcome to do so, especially if you're into crazy killer kid movies and/or a big Halloween horror nut who's a little tougher to crack.
Bodycount:
1 male knifed, later found with his eye plucked out
1 female shot on the face with a rigged shotgun
1 male hacked on the head with a hatchet
1 female crushed against a tree with a van
1 male disemboweled
1 female wrapped in barbwire and set ablaze
1 female strangled with fairy lights
1 male shredded with a lawnmower
1 male stabbed on the throat with a fire poker
Total: 9
~~~ 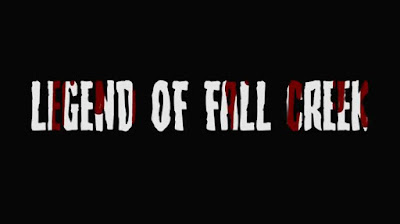 Legend of Fall Creek (2021)
Rating: *1/2
Starring: Frank Brantley, Alton Clemente and Chuck Clendenin
After opening with a brief lesson of vocabulistics regarding the term “Grindhouse” and a text scroll backstory to the urban legend of Bobby Maxwell, a boy who vanished into the woods of Diablo's Den back at 1988 Halloween, the plot officially starts with a couple with car problems getting stranded on a road at All Hallow's Eve midnight and, as you would've guessed, they're soon killed by someone.

Cut to hours later and we now follow one Reggie who's returning to his home town to visit his favorite cousin Tiffany, 20 years after he and his family suddenly moved away. Their plans to catch-up lead to them attending the big Halloween party in town later that evening, unknown to the cousins and pretty much everybody else that Bobby Maxwell, AKA "Bloody Bobby", has gatecrashed the festivities with murder, mayhem and revenge in mind.
Although marketed as the prequel to Black Pumpkin (2018), Legend of Fall Creek (2021) actually takes place first, shot two years before Pumpkin under the title Bloody Bobby before being edited and retitled for distribution. This said, the movie certainly shows its age and low(er) budget and, I'm not gonna jerk around with this but, yeah, it's bad; the plot wallows in D-grade melodrama talk in large chunks and snail pace, hardly showing and doing anything horror-related until it remembers that it has this killer kid thing going around the opening and throws in a murder and/or exposition when it has the time. It does eventually go full slasher by the third act once the Halloween party starts but that doesn't really help when there are hardly any likable and/or interesting characters to go with this, further falling the film short on the entertainment factor.

Annoyingly, whenever a kill or so happens, Legend of Fall Creek (2021) go Grindhouse on us with video and audio effects made to look and sound like melted film reels, distorted voices, slow-mo shots and the likes. I'm not sure whether this is already in the unedited Bloody Bobby version or these are the editing done by the folks back at distribution, but all it does is make the murders hardly comprehensible and cheapened, something a good Grindhouse tribute should avoid doing at all costs!
In a way, I can see why Black Pumpkin (2018) was released first as that film is a whale of an improvement compared to Legend of Fall Creek (2021). What we have here is a trainwreck of corner-cutting direction, talky bad acting and tiresome plotting with barely anything to make up for them, a real damn feat at being unworkable. So unless you're a real hard ass for punishment, I suggest skipping this one.
Bodycount:
1 male found slaughtered
1 female brained with a hammer, later found gutted
1 female knifed to death
1 male decapitated with a machete
1 male brained with a bat, beaten against a toilet
1 female stabbed in the gut with a machete, later found garroted with fairy lights
1 female crucifix to a wall, gets a nail hammered into her mouth
1 male stabbed in the mouth with a nail and had his guts fished out
Total: 8
Posted by Kaijinu at 2:08 PM