Lives And Deaths In Osborne, Nebraska: There's Someone Inside Your House (2017) 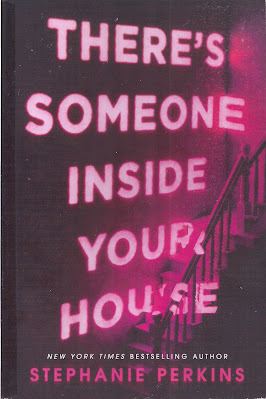 There's Someone Inside Your House
Author: Stephanie Perkins
Publication Year: 2017
Chapters: 29
Rating: ****
Welcome to Osborne, Nebraska. Population of twenty-six hundred.
Or, at least it was.
It's been almost a year since Hawaiian-born Makani Young moved to this small town and all she wanted is to live a life of normalcy accompanied by new close friends and a loving grandmother, as well as finishing her high school senior year without her dark past coming back to haunt her. But when news broke out that one of her classmates was found with her throat slaughtered and her eyes slashed into grotesque "dead cartoon eyes" one morning, Makani finds herself in the middle of the dilemma when she decided to rekindle her relationship with Oliver "Ollie" Larsson, her lonesome pink-haired Summertime fling and possible suspect.
With Ollie having a bit of a reputation, one that involves ghastly rumors about his parents' demise, it isn't much of a surprise that Makani's friends are uneasy with him just looming around her. But do they know him as well as she does? Or has Makani's budding romance towards the boy blinded her from the possibility that he could be a vile murderer? As more bodies pile up, it's only a matter of time before Makani learns the truth behind these killings and that she might be the only one to stop it.
With a tone screaming pure 90s slasher nostalgia, There's Someone Inside Your House is author Stephanie Perkins' first stroll in penning an impressively violent teen horror after her line young adult romance novels, merging coming-of-age teenage drama with bodycounting nightmares in an attempt to flesh out its characters and build up the intrigue surrounding the murders. It's a direction that comes with a double edge as after the tension-building first murder, the story halter itself into a bit of a slump as we focus greatly around Makani's relationship issues with (one of) the town misfits; a bit of romance adds layers to the plot and it gives our leading characters their likable charm and depth, yes, but a long while of this nearly made the plot looking a tad like another romantic shindig only with a side of slasher horror.
Fortunately, once the murders start rearing up again, the plot picks up in a speedy and entertaining pace as a couple of chapters are dedicated to the morbidity and creepiness of the killer's attacks, written with a flair of brutal dismemberments and visceral slayings, accompanied with effectively distressing mind games done to toy and unnerve its unfortunate victims. It's around these parts we also get to know more about Makani's hidden past and how it intertwines with her present state as a potential target to a killer who's doing well enough to evade capture. As much as it adds a bit of mystery and edge to the situation, I better enjoyed the fact that the developments within these parts got rocky and tested, yet ending with Makani and her friends and lover bonding stronger to form a firm little group racing against time to stop a killer from claiming more lives.
Curiously, the last third of the book is where the whodunit ploy gets swapped out with a more manic stalk-and-prowl act wherein the killer is revealed not just to us, but also to the main casts, and yet our psycho continues their rampage, slaying as many as possible while the whole town searches for them. It's one of the best turns the story could've made and the resulting carnage is as exciting as it is gruesome, plus the thrill of knowing the killer yet unsure where they'll strike next is a whole ballpark of satisfactory horror reading!
For what it is, There's Someone Inside Your House is an interesting addition to horror literature and a fun, quick read for slasher fans who hopefully wouldn't mind a lot of make-out sessions before and after a bloody good kill. While it may not necessarily add anything new, it's a good story that you can't put down, especially once that hunting knife gets wielded and the town of Osborne gets to know the face of true madness!
Bodycount: 6
Notable Kill: In context, this is a simple kill with some laughable imagery, but an entire chapter was built around the murder of a football player contemplating whether he is suffering from CTE (Chronic Traumatic Encephalopathy) or not. The details written about his panic, confusion and distress just made the entire thing a lot more cathartic. I feel for the dude...
Posted by Kaijinu at 10:46 PM