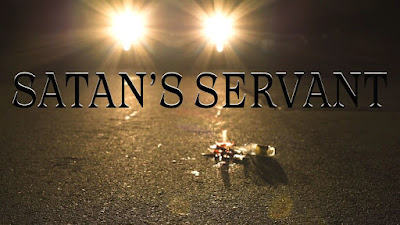 Satan's Servant (2021)
Rating: **1/2
Starring: Josephine Thompson, Erin Wynden and Sean Okimoto
After a girl in their town seemingly disappears one night, bestfriends James and Tyler suspect a similar worst case scenario when they learn their friend, Jane Booker, hadn't come home from a party they were attending just hours ago. Through a rather uncomfortable talk with her mother, the boys figured they could try tracking her through her phone and soon finds her... safe and sound with her boyfriend, Bryan. 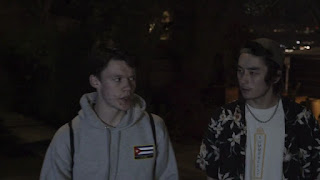 Turn out that Jane's avoiding her mom like the plague as earlier that evening, Mrs. Booker duct-taped Jane to a chair and rambled on about a murder-y Satanic ritual she planned to better her daughter. Jane, of course, thinks her mum have gone cuckoo for Satan (Well, further cuckoo. Turns out this wasn't ole' mumsie's first dabbling with the dark arts) and managed to escape her captor.
Hoping to put a stop to Mrs. Booker's Satanic reign, James, Tyler, Bryan and Jane hatch a plan to lure her out and find as much evidence as possible back at the house for their claims of ritual murders and unholy pacts. Unfortunately for these teens, Mrs. Booker has grown desperate to get her daughter back to do the ritual, so she enlists the help of a mask-wearing otherworldly butcher and all hell will soon break loose...
Within the budget of around $2000. 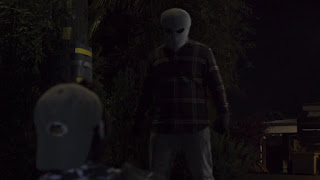 Satan's Servant (2021) advertises itself as a film made by teens and there really is no denying that fact; in true do-it-yourself fashion, the entire production is made within a close circle of friends and families, with special effects and editing done on the most frugal fashion, as well as acting chops that are just as good as the writing done for them which isn't really a lot. In a sense, it's not an effective horror movie given its near no-budget quality for, well, everything, but Satan's Servant still has its interesting plot points and a rather ambitious execution despite its budgetary restrictions so entertainment-wise, it's pretty okay.
There's no doubting the room of improvements needed here, particularly the writing, its tone and the gore effects, but Satan's Servant (2021) can still be seen as a nice little throwback to late 80s and early 90s SOV horror titles that haunted almost every Mom & Pop video rental stores, all cheap as chips but determined to entertain! With its little serving of Satanic horror meets suburban slasher, why not give this little slice of horror effort a try?
Bodycount:
1 male mentioned killed, later seen with a stabbed chest
1 male gets an arm torn off and a thrown knife to the head
1 male stabbed in the head with a switchblade
1 male stabbed in the gut with a garden shear blade, head torn off
1 male decapitated with a switchblade
1 female knifed in the neck
Total: 6
Posted by Kaijinu at 11:01 AM