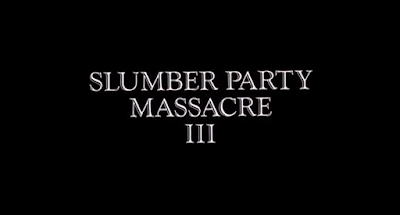 Sure, it's called Slumber Party Massacre III, but it's less of a sequel and more of a reboot, honestly.
For those who are not acquainted, the Slumber Party Massacre franchise is a series of slasher flicks about, well, slumber parties and massacres. Each have gals and guys doing shenanigans one would expect from teen comedies involving girls getting together at someone's house while their parents are away, which means boobs and butts, beer and pizza, and boys with butthole pranks. All the while, we have a killer with a powerdrill thinning down the number of invited and uninvited guests one by one, until too many have gone missing and the party people started noticing.

The original 1982 title is basically this in its most entertainingly barebone structure, practically one of the best among classic slasher films there is. The 1987 sequel followed up the original's story, though in an entirely different tone as supernatural elements are added through nightmarish visions and dreams, as well as the introduction of a more ghostly driller killer with a 50s Rockabilly aesthetic and swinging dance moves. (Personally, my favorite Driller Killer!) By 1990, we get Slumber Party Massacre III and this one opted for a more back-to-basics approach to its slashings, albeit with an altogether different group nix to do with the first two films.
In this round, a group of California gal pals decided to hold a slumber party as a last hurrah for our lead girl Jackie as she's about to move out of town with her parents. Pizza's ordered, beer's a flowin', and we get a nightie striptease ending with the girls' boyfriends sneaking in and giving them the scare. But all's not well this night as someone armed with an over-sized powerdrill (and on one scene, an electric dildo) is making their way through the teens. But who could it be?

Could it be the creeper creeping up on them from afar earlier at the beach? Or perhaps it's the next door neighbor with the serious stalker vibes? Or maybe it's somebody else? Somebody with uncle issues?
Despite being released in the early 90s, Slumber Party Massacre III (1990) has all the makings of a traditional 80s slasher from sexed-up teens with big hair, zero personalities and badly acted lines, to a wise-cracking killer revealed an hour into the movie after trying to play us around with multiple (though obvious) red herrings. It isn't all that surprising then that this entry feels rather dated and cliched, lacking any real strong points save the last 20 minutes or so where we get multiple final girls face against a blinded and completely maddened killer. (A callback to the original Slumber Party Massacre)

It's not all bad though as the film does still pack a decently sleek production for a basic slasher flick, bearing some of level of cheese and titillating skin among its attempt to be more serious in its plotting and, too, treating us with a double-digit set of bloody kills. The only real thing to mind here is that it doesn't offer anything we haven't seen before and that might be okay for those who prefer their bodycounters by the book, others looking for a more creative twist on a good slasher may want to look elsewhere if they're not willing to give this a try.
Slumber Party Massacre III (1990) isn't a terrible flick, nor is it a great one either. It's an average horror treat that is easy on the eyes and did all the slasher trick right enough to be at least worth a watch or two. That is my two pennies worth!
Bodycount:
1 female ran through the back with a powerdrill
1 male impaled through with a sign post
1 female repeatedly gets stabbed in the gut with a powerdrill
1 female electrocuted in a bathtub with an electric dildo
1 male found stabbed in the mouth with a swordfish's beak
1 male gutted with a powerdrill
1 male had his face bashed with a powerdrill
1 female found disemboweled with a drill
1 male found bled to death from chainsawed ankles
1 female stabbed to death with a powerdrill
1 female knifed to death
1 male repeatedly stabbed with a powerdrill
Total: 12
Posted by Kaijinu at 2:36 PM