Let's Do The Surrealist Boogie: Boogieman (1989) 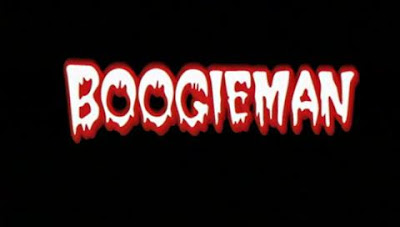 Boogieman (1989)
Rating: **
Starring: Ken Tignor, John Murray, Patrick O’Brien
I guess it goes without saying that as a slasher fan and completist, one of the more exciting aspect of this hobby is finding rare titles and gambling said excitement for a chance the rarity I'll be subjecting my brain and eyeballs to would either reward my efforts just to find it, or punish me gravely for disturbing its decades long slumber in obscurity.
And then there's the chance that the movie would put me in a confused state where I cannot even fathom my feelings for it. Such being the case for Boogieman (1989).

Right off the bat, the movie begins with  a snippet of its director, Charles Cullen, being interviewed while he rocks a pair of pantyhose. Next thing we see is our titular boogieman laying waste to a bunch of locals through varying means of carnage, much to the grief of the town mayor who's so desperate to put an end to this nightmare, he hires a witch doctor and a bounty hunter once convicted for murder, rape and robbery to hunt the monster down and kill him. (The ole' send a monster to kill a monster gig, I think)
Try as they might, however, the Boogieman continues his killing spree of torching people on fire, shooting random bystanders to death and pounding babies to a pulp with a damn hammer, (among many means) upping the kill count day by day. Will the mayor and his odd cohorts finally stop this madman in time before the town's completely depopulated? Or will the Boogieman succeeds in his senseless murder run?

From what I can gather after finishing the entire thing, Boogieman (1989) is a real effort of little-to-no budget as seen with its avant-garde filming production. Story is almost non-existent as the movie basically pads itself with over-the-top kills and scenes where nothing much really happens, before remembering that it has a plot (of sorts) happening in the midst of all the oddity and over-the-top violence this film dishes and, unsurprisingly, treat us with writing and acting in par with the overall strangeness. Heck, I don't think they even bothered fleshing out our killer's motives for the murders at all!
I cannot help but both grimace and scratch my head to what exactly am I subjecting myself to while I watch this title but, if anything really, Boogieman (1989) is the type of film tailor-made for a specific audience, particularly those who can stomach a lot of cheese and appreciate the genius of using black-and-white to hide a film's budget while, intentionally or not, heightening the brutal aesthetic of its murder scenes. It's for the kind of people who can find the charm or even a snicker or two out absurdities like having a scene where our stereotype slasher villain cut a victim up with a chainsaw, only have said chainsaw murder animated instead with a crayon drawing because that's as how far the budget can afford the scene. If you see yourself as someone who can withstand such levels of shot-on-video filmmaking and hammy headscratchers then consider this piece the kind of shlocky entertainment you can subject one's psyche to.

One could say we might be looking at a so-bad-it's-good type here, or maybe even an experimental artsy kind of exploitation, but one thing is certain and that is Boogieman (1989) is an experience of the surrealist kind. Should luck be on your side (or against you, depending on the circumstances) and you see a chance to watch this, I say give it a try! I don't fully recommend it, but if your curiosity is peaking and you have the time to look into it...
Bodycount:
1 female hacked to death with a machete
1 female hacked apart with a chainsaw
1 male had his head blown off with a hunting rifle
1 female shot apart with a hunting rifle
1 male hit with a car, decapitated upon impact
1 male hit with a car, torn in half
1 female set on fire
1 male set on fire
1 male eviscerated with a chainsaw
1 female shot to death
1 baby pounded to death with a sledgehammer
1 female had her throat cut with a machete
1 elderly female had her neck snapped
1 female slashed to death with a chainsaw
1 boy hacked to death with a hatchet
1 male had his throat cut with a knife
1 male repeatedly shot, throat cut with a knife
1 male shot
Total: 18
Posted by Kaijinu at 12:26 AM