The Murderous Science of T&A: The Invisible Maniac (1990) 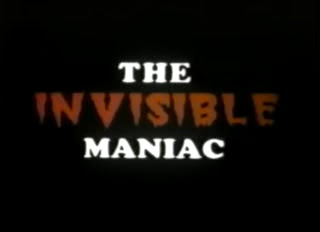 The Invisible Maniac (1990)
Rating: ***
Starring: Noel Peters, Savannah, Stephanie Blake
If there's anything The Invisible Man (1933) made it clear for me is that invisible killers are absurdly creepy; they can be anywhere, silently watching and biding their time while you go about your business. Studying you. Taunting you. Finding the right moment to strike and maybe cut your throat open with a piano wire. It's an unnerving concept and very few slasher movies like Hollow Man (2000) and its 2006 direct-to-video sequel tackled the advantage of fantastical but unnerving psychological horror of having invisible killers.
And then we have The Invisible Maniac (1990), hamming it up with its soggy, sordid tomfoolery and an alarming amount of cheddar.

The film starts with little Kevin Dornwinkle and his telescope, observing the female human anatomy by spying on a neighbor erotically changing out of her clothes. His mum walks in and catches the little dork in his voyeur session, so she grounds him that night while mocking his dreams to be a real scientist should he keep up being a big creep.
Two decades later and we now see an adult Dornwinkle making it far enough in his studies to gather around a gaggle of the world's most renowned men and women of science, to have them observe what's basically an invisibility juice he'd been working on. Things didn't go well as planned, of course, as he fails to turn invisible upon taking the concoction, much to the humor of the scientists seeing this. Unable to bear it all, Dornwinkle snaps and went on to murder a handful from the taunting group before getting his ass hauled away to an insane institution.

He didn't stay there long, though, as Dornwinkle eventually breaks out and somehow lands the opportunity to take over a high school physics class after its previous teacher died choking on a sandwich. The problem with this gig, however, is that the class happens to be filled with the rudest and horniest bunch of troublemakers who are quick to put their foot down from being educated by a huge dork, retaliating by pranking and harassing Dornwinkle whenever they get the chance to.
With the stress of maintaining his temper in check and his sex drive repressed, Dornwinkle keeps himself busy off school work by continuing and perfecting his research on invisibility, which he soon succeeds to great effect. Feeling exploitative and itching to get revenge, he'll make all the nasty kids pay and he'll do it with a wise-crack or two!

To expect The Invisible Maniac (1990) as anything but a cheesefest is like expecting a two-year old to know and sing the entire I Am The Very Model song from The Pirates of Penzance. Backwards. It's just not possible. Not with this movie's high reek of ham and cheese, bodacious T&A and nonsensical horror plotting, thus making it the kind of entertainment that requires its viewers to (as much as they can) turn off all the thinking lights in their heads to fully enjoy the fromage, if not at least appreciate it.
The movie knows it's bad, fully aware of the ridiculous side of invisible killers even, and it's this kind of direction and tone that frankly help The Invisible Maniac (1990) be an enjoyable romp of outrageous sleaze and B-grade horror comedy that thankfully didn't completely overcook itself in its own cruddy jokes. Writing and acting are in par to what you would expect coming from a melting pot of horny teen comedies and shlocky slashers, complete with Dornwinkle going wisecrack at us with groan-inducing severity once he'd gone full psycho. Whatever tinge of horror left are implemented good enough to color a few chase sequences and classroom attacks interesting, only to be punctuated with whacky and mostly bloodless killings that are so nuts, they're somewhat memorable. (I'm sure throats don't bubble like a balloon when you shove a whole hoagie down into them. Unless, of course, I've been shoving hoagies down unsuspecting victims' throats the wrong way all this time...)

It's not going to be for everyone, but for some of us with a less judicious taste for horror comedies, The Invisible Maniac (1990) can be a whole lot of lewdly zany and off-the-wall cheesy fun. The appeal of it is undoubtedly aimed for to those who can easily throw out logic for some silly shlock so should you feel like giving it a chance, I say just relax, switch off, and enjoy the lousy goodness that is a blouse-ripping, wise-cracking invisible killer geek!
Bodycount:
1 male strangled
1 female had her neck snapped
1 female beaten to death
1 male brained to death with a suitcase
1 female stabbed with a letter opener
1 male had a sandwich shoved down his throat, choked
1 female strangled with a hose
1 female drowned in a fish tank
1 female strangled to death
1 female electrocuted in a shower with a live radio
1 male falls off a building and lands on a car
1 female stomped
1 male had his head blown off with a shotgun
Total: 13
Posted by Kaijinu at 2:15 AM