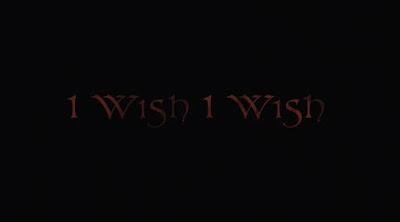 I Wish I Wish (Deseo Deseo) (Mexico, 2016)
Rating: *1/2
Starring: Israel Amescua, Fitzgerald Navarro, Iván Mondragón
The concept of wishes getting twisted into something horrifying and deadly is a tale as old as time, going as far as the early 1900s with W.W. Jacobs' classic short The Monkey's Paw, which dabbles around the titular trinket and its wish granting abilities, doubling as a cautionary horror story when the wishes start to go awry. Over the years, horror cinema churned their own take on the "bad wish" trope so it wouldn't come as a surprise that for every Wishmaster (1997), we get some duds along the way.

Five young relatives with rather complicated familiar ties gather around at their late grandmother's house one day and finds an old board game called I Wish, I Wish. The rules of the game have each players say three wishes, starting with the phrase "I wish I wish", and those wishes come with payments and punishments: in order to make a wish come true, they have to do whatever the payment is, or else they'll get whatever vague punishment assigned to them instead.

Thinking little about it, the group have their turn saying whatever wish comes in mind, some for the best (curing an ailing mother's cancer), others typical (to be a millionaire, be famous or have a body like Bruce Lee's), and then we have one guy wishing he could fuck his own cousin. (No. Really) As you would expect, those who went through their respective payments -intentionally or not- got their wish in a twisted way, while those who didn't are punished just as darkly and severely. Quickly understanding that the game is for real, they try fixing their mistakes by making wishes to undo the results of their prior ones, although this time the game demands blood and death.

There's a few good ideas tossed and tumbled all over I Wish I Wish (2016), like how some of the wishes granted are actually clever in their irony and simplicity, and too the fact that the film tries to keep things interesting by implementing physical, supernatural and psychological threats through out the film, which means we get a variety of deaths and scares. Unfortunately, the story is hardly new and a good deal of the supposed scares barely worked, nor are most of the deaths worthwhile for how tame they can get. Add the fact that none of the characters are even likable as they come off rather dull, if not shallow, snobbish, obnoxious, immature and/or rapey, and we have this predictable low-budget flick where I hardly care about anybody being terrorized in the story so it's hardly a film that matters on my book.
The last modern wish-gone-bad bodycounter I saw was Wish Upon (2017) and as much as that movie kinda sucked as a PG-13 affair, at least it was unintentionally hilarious at its worst. I Wish I Wish just tries too much take itself seriously and given its obvious low budget, independent production, I'll give it points for the attempt, but the resulting flair is just overdone and lame. What else is there to say but I Wish I Wish I never bothered with this movie.
Bodycount:
1 female seen smothered with plastic wrapping around her head
1 male seen disemboweled
1 female seen pinned to the wall with knives
1 female implied to have passed away
1 male frightened into a heart seizure
1 elderly male drowned in a bath tub
1 male murdered offcamera, heart torn out
1 male pulled into a pool, drowned
1 male stabbed to death with a pair of scissors
1 female brained to death against the floor
Total: 10
Posted by Kaijinu at 9:16 PM