Sadness Will Lasts Forever: The Forest of Lost Souls (2017) 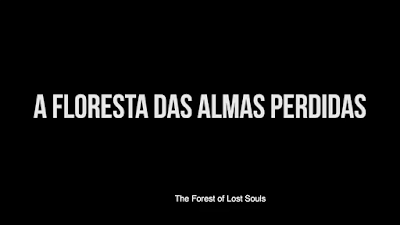 The Forest of Lost Souls ("A Floresta das Almas Perdidas") (Portugal, 2017)
Rating: ****
Starring: Daniela Love, Jorge Mota, Mafalda Banquart
In this directorial indie debut of Portuguese filmmaker José Pedro Lopes, we follow troubled family man Ricardo (Jorge Mota) as he enters the Forest of Lost Souls, a vast backwoods wherein many visited with the purpose of ending their lives there. (Think Japan's Aokigahara, the infamous "suicide forest") He's there to do just that, only to have his plans slightly sidetracked by Caroline (Daniela Love), a death obsessed young woman who claims to have visited the forest multiple times, undecisive with her decision to commit suicide but often comes prepared to do everything before and during the dark deed.

As they wander the woods, they engage in talks mostly about the philosophical side of life, death and suicide, often interjected with Ricardo doing his best to talk Caroline out of ending her life at such a young age (all still preparing to kill himself, mind you), while the girl teases the old man back for his lack of preparation. As the two reaches the forest's lake, Ricardo decided he's ready to end himself then and there, asking Caroline for the bottle of poison she's been keeping. As he lay down, life slipping away from the concoction, he looks at the photo of a daughter he lost to the same forest one last time...
And then a knife's wielded.

Plot-wise, The Forest of Lost Souls isn't hard to follow despite having two altogether different of narratives; the first half is a dialogue-driven monograph looking into the human conditions of emotion and mortality through a more mournful and, sometimes, darkly humorous mindset. It's hauntingly captivating, raising questions as to why we would want to off ourselves and the discussions cut deeps into the subject often than not, setting up theatrics not far from a typical coming-of-age drama and dropping out any sense of exploitative horror up until we're halfway into the movie.
By then, it is revealed that one of these lost souls harbors a terrifying secret, one that involves the maniacal need to murder, and The Forest of Lost Souls switches its gears into a home invasion slasher as an unsuspecting dysfunctional family gets targeted by a knife-wielding psychopath. The resulting violence is far from carnal as it plays more on being creepy with a good dash of melancholy, taking its time building around the victims and their current plight in life with the killer basically just skulking around in the back completely unnoticed until they're ready to strike. This direction gives the considerably small casts more depth than your usual slasher psychos and trope-filled meat bags, so whether it's the killer or the victims we're observing, they all felt like they're carrying a lot of emotional baggage so the horror aspect of this film is relatively cathartic.

Other points I enjoyed from this title would be composer Emanuel Grácio's range of scores from the fantastical to the intense, as well as the film's use of black-and-white photography which works both as a thematical artistic choice and as a way to enhance the chilling atmosphere around the second half as our killer just blends in with the background unnervingly well, working a lot of amazing cinematography.
A bit more cerebral than your average bodycounter, The Forest of Lost Souls is a brief 70-plus minutes of sorrowful soulfulness first, stylized stalking and bloodletting second. It's a combination that's not commonly tackled together in a single product, but this film found a way to make both elements work with the other. Sadness may last forever and time may destroy everything, so why not go treat yourself and see this indie masterpiece while you still can, whenever you can!
Bodycount:
1 male seen dead
1 female drowns in a lake
1 body found dead from gunshot
1 body found dead against a tree
1 skeleton seen buried in mound
1 male poisoned, gutted with a knife
1 female knifed to death
1 female knifed on the back, shot
1 male ran over with a car
Total: 9
Posted by Kaijinu at 8:26 PM