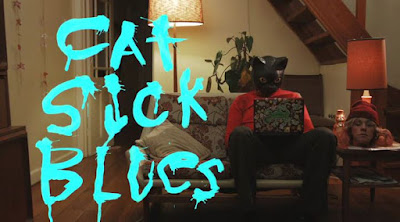 Seeing herself tangled into this mess is one Claire Ellis (Shian Denovan), who used to make cute cat videos for Youtube until one of her fans stalked her, accidentally killed her cat and then raped her. The assault was filmed and shared online, pretty much to destroying Claire's spirit so she started attending a therapy group for pet owners grieving for their deceased fur babies. Unknown to her, Ted happens to be in the same group and has taken a liking to Claire. The two disturbingly hook up, completely with fast food dates and unengaging sex, but the more she engages with him, the more she suspect Ted being the one responsible for the recent string of serial murders and that she might be in serious danger.

So let me just get this out and say if you think watching a disturbed man devolve into a seizure-prone, cat-obsessed serial killer who wears an ensemble of a cat mask, metal claws and an almost anatomically-correct latex feline shlong whilst breaking into people's homes to slaughter them is a bit too off-the-wall for your taste, I do not blame you. Not at all. What we have here is a psychological slasher of the arthouse kind, littered with as much weirdness and grief as it is with gory killings and disturbing imagery. It has its way of weighing in emotions of turmoil and trauma, though this is often clashed by the movie's scatterbrain approach of weird visuals combined with trippy editing and the result's mostly all over the place.

A part that makes Cat Sick Blues (2015) an effectively unnerving watch is the unpredictability of its main character Ted. Matthew C. Vaugh played his role with much awkward yet dangerous bravado that it's darn convincing we're watching a serial killer at the brink of self-destructing madness. You can tell he's always up to no good even during his quieter moments where he just sits and stares at people, contemplating his twisted goal of bringing his dead cat back to life. I mean, if the barbed cat-cock strap-on isn't an indication of his very unstable state (which I am thankful he never used in a practical sense), then I don't know what is...

The slasher elements are messily punctuated here by gruesome practical gore and a fairly sizable kill count filled with decapitated heads and copious amount of clawing-related deaths courtesy of the Ted's metal mittens. If the heavy bloodletting isn't shocking enough, then the gross-out last act where the movie really let itself go will certainly churn stomachs as we get force-ingested slurries of human blood and cat corpse, as well as an overly long and disturbing faux finale about diseased nodules and a monstrous birth. Again, Cat Sick Blues (2015) is one strange film, absurdly demented and depraved in every angle you can look at it and its unapologetic for that fact.
Without a doubt, this is a film made for a certain kind of audience and I find myself on the admiring side of the crowd. I can't say I like it all the way, but I can tell this is someone's vision of a notorious indie horror and I respect that. Fans of extreme underground horror will certainly get a kick out of Ted and his deranged mission to bring back his beloved pet at all cost, but what say you?
Bodycount:
1 female decapitated with a shovel
1 female strangled with a garden hose
1 female had her throat cut with metal cat claws, decapitated
1 female had her face beaten to a pulp with a statue
1 female gutted with metal cat claws
1 female had her throat slashed with metal cat claws
1 female stomped on the head
1 female choked on barbed dildo
1 female had her throat slashed with metal cat claws
1 male had his throat slashed with metal cat claws, bled to death
1 male hanged
Total: 11
Posted by Kaijinu at 12:43 PM