A Family That Preys Together: The Strangers: Prey At Night (2018) 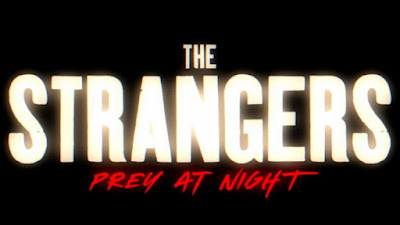 It's literally a decade since I first saw The Strangers (2008) and while that movie wasn't a complete crowd pleaser, I take pride on being one of its few sincere fans who appreciates its simplistic plot and practice of creating an intense home invasion horror quickie. Thus, it came with no surprise that I was stoked to find out its sequel was finally happening. Do I dare, question if the ten-year wait was worth it, though?

In this film, a family of four drives up to a trailer park campsite for a much needed bonding time while they wait to enroll their teen rebel daughter for boarding school. What they weren't counting on though is to find their nearby relatives slaughtered and become the next targets of the perpetrators, a trio of masked strangers who takes great pleasure on toying and murdering their victims.
If the original Strangers felt like a slasher climax stretched to a feature length running time, Prey At Night is simply a backwoods slasher centered on a dysfunctional family and their three masked prowlers. I can't say this is a bad move for Prey At Night since it is still entertaining for what it is, but I cannot help but feel underwhelmed on how generic one of my favorite home invasion films ended up in its own follow-up, ditching silent dread, building suspense and choking uneasiness for a mostly direct prowl-hack-stab action that is so rushed and typical that it lacks other substance aside from being a bodycount fodder for the horror fans.

Prey At Night did try to replicate some of the creepy set-ups and villainous behavior that made the original workable, but the tone of these attempts was lacking, leaning towards uninspired, and I guess it doesn't help too that the victims here made the usual bad decisions your typical horror movie teens are known for, but I will at least commend the four leads- The Ring (2002)’s Martin Henderson as father Mike, Mad Men’s Christina Hendricks as mother Cindy, Bailee Madison as daughter Kinsey and Lewis Pullman as son Luke- on their performances as frightened victims. They have very little to work with apart from being "a family with a rebel daughter" (So not a lot on the character development factor despite talking about financial issues and the old 'friends-over-family' spiel) but once the hack-and-stab got going, they are at least reactive enough to the supposed horrors happening to them and about a half of their characters were given a fighting chance against the killers.
And speaking of whom, the titular strangers - The Man In The Mask, Pin-Up Girl and Dollface - practically became carbon copies of early days Halloween's Michael Myers or Friday the 13th's Jason Voorhees in this movie, minus the horror titans' invincibility and murderous creativity (but not the onscreen bloodletting) which meant the trio are sadly as replaceable as the fact they're now also susceptible to being killed off themselves. I will admit it was a shocker for me seeing my favorite trio of home invaders getting snuffed off (or seemingly so), but with the way they're portrayed here, it almost felt natural, deserving even for some of them to die as they're so far from the effectively methodical creeps I enjoyed the first time around that I can't help but root for what will remain of their targeted family to bash their brains in with a baseball bat for being so reckless now.

Quality-wise, Prey At Night looks slick with it's 80s inspired motifs such as bright neons and bubblegum pop tunes blaring out of the killers' truck, a complete contrast to the original's 70's exploitation-inspired grittiness. Apart from Friday the 13th and Halloween, the film also made a few nods to John Carpenter's killer car sorta-slasher Christine (1983), the 1983 Stephen King adaptation of The Dead Zone, Fulci's Zombie and much to my joy, even the finale of Hooper's The Texas Chainsaw Massacre (1974). Its fast pace can be a saving grace for some, and too some of the jump scares for that popcorn quality "Boo!" moments and its fiery climax that's probably one of its better set-pieces.
In fact, if one would look past the point that this movie is supposed to be a sequel and just see it as a standalone, it ain't half bad. The Strangers: Prey At Night may not have an effectual set of villains or potent scares, but as long as basic slasher fanfare is concerned, it is a fairly decent streak of mayhem and chaos that one may enjoy more with an incomplex mindset. Not a total lost, just failing to impress.