Messed-Up Messiah: Brutal Jesus And The House of Wasted Youth (2010) 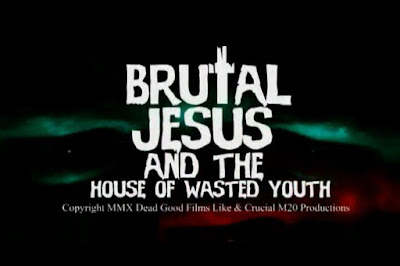 The son of the Christian God as a slasher villain?! Dare I say blasphemy?!

Well, I would but seeing I run a blog that's more or less dedicated in finding entertainment from onscreen violence, I don't think I warrant enough rights to play the holier than thou card. Besides, I pretty much given up on organized religion at this point of my life (Though still believing in a god. Or gods.) and there are far worse things one can depict the Messiah as.

In Brutal Jesus, however, I do wish the title has some shred of truth to it. The film starts with someone resembling Christ walking down a sunny street and enter a house owned by a group of drugged up and/or drunk teenagers, the titular Wasted Youth. Being so out of their minds from all the substance abuse, they pay little to no attention to their awfully quiet and stoic guest, believing the man in white cloak is just another door-to-door Jesus freak. After further passing the time getting shit-faced, the teens soon learn that our Christ figure has a bone to pick with them for something they did not too long ago and he ain't there to preach. Rather, he's out for their blood.

That is, though, if blood will ever be shed. For a semi-feature that calls itself Brutal Jesus And The House of Wasted Youths, there's not a lot of brutality as our titular Jesus barely uttered a word that one may count as brutal, and the murders are relatively tame (varying forms of suffocation) which doesn't exactly associate well with the adjective. (Then again, your standards for "brutal" may not be the same as mine, dear reader) Furthermore, having our Lord and Savior as a slayer of teens is darkly humorous on its own, but the movie's tediously empty and repetitive stalk-kill-repeat plotting undermines the shlocky fun opportunities its ridiculously offensive content would have suckered us into watching, doing little and roughly coming up nothing less than a cheapie slasher.

With this, I cannot help but sense a wasted opportunity here, that it could have done more than what we currently have right now. Still, I can't totally dismiss this film for these shortcomings as I do get this is a micro-budget production and there's probably not a lot moola to go around to shoot better set-pieces. From what I can get from Brutal Jesus were, on a level, okay on my book: I like how the movie manages to get the 70s drive-in/grindhouse feel it attempted to recreate and it even gives us a little twist questioning whether the titular Jesus is really the Messiah gone homicidal or not, doubling as a neat reveal as to why he is out to get these youths.

So overall, Brutal Jesus And The House of Wasted Youth is a slightly misleading yet deliriously entertaining quickie that may have done better with some splatter to really shake things up, as well as some editing to shorten some padding issues. What it lacks in bloodletting, it makes up with some dark humor and zero-budget charm that's tailor made to satisfy fans of shlock so it's safe to say this isn't a movie I can easily recommend, but if you're willing to subject yourself to its madness then by all means, may Brutal Jesus be with you! 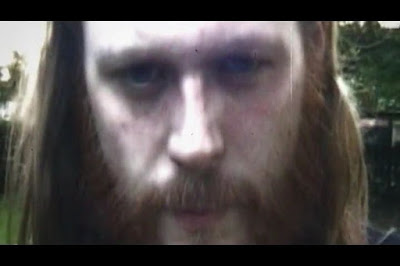