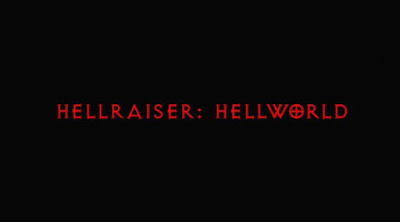 As of writing this, I saw the latest Hellraiser movie, Hellraiser: Judgement (2018), around the beginning of last February and I thought it was kinda good until the last act where they pulled this cheap monologue-fest that tries to be oh-so-philosophical but, really, all it did was bore the hell out of me.

I remember the days when the Hellraiser franchise meant something exciting for me. When the presence of Pinhead, hell's high priest of blood and gore, and his monstrous cenobites meant gory eye candy and hellish philosophies are abound. Now, looking at our 2010 entries (Judgement and Revelations (2011)), I think it's best that we nail the coffin shut for good (or at least someone finally do that reboot) and this disappointment led to me binge-watch what I consider the good Hellraiser movies (The original 1987 movie and its first three sequels) and one guilty pleasure from the franchise to mend my wounds. You can make a wild guess what that one guilty pleasure is.

Much like all the other Hellraisers after Part IV: Bloodlines, Hellworld stands on its own continuity and takes a (rather confusing) Meta-stab at itself as Pinhead, his mutilated cohorts and the rest of the Hellraiser mythos apparently exists in this movie as a game called Hellworld which is so damn good, people will kill themselves for it. Literally.

The movie starts with one of said Hellworld fanatics, Adam, covered in small wounds, digging a hole and screaming. We then jump forward to his funeral as, it turns out, Adam burned himself to death because something in the game forced him to. His five common friends pay their respects and blame themselves (in varying degree) for the incident, all the while feeding us all the exposition we need to understand what's going and why this is a big deal. They all agree to stop playing the game to honor their late friend, but it wasn't long before they're back at it two years later, this time winning invitations for a private Hellworld party at a cryptic backwoods mansion.

There, the kids meet Lance "Pumpkinhead" Henriksen as their unnamed host, a self-proclaimed ultimate Hellworld fan who tells them that the very mansion they are at was once a convent-turned-asylum, which meant there's a spooky basement full of sharp, pointy and stabby medical tools and there are hidden rooms full of medieval-esque torture devices. (Y'know, things that are obviously gonna be used to kill these teens later) The host soon lets the kids party, but it's obvious he has plans for them. Plans involving visions of dead people, ghosts from the past, and Pinhead and his cenobites prowling around while spatting cheesy one-liners.

An interesting fact to point out is that Hellworld's script didn't start out as a Hellraiser sequel but as a short story called Dark Can't Breathe by Joel Soisson. One can only imagine that the story was re-purposed into a Hellraiser movie by adding Pinhead and company into the picture, which would explain why Hellworld is so different in execution and tone; while the Hellraiser franchise have more in common with supernatural "horror-of-the-demonic" splatterpunk or urbanized dark fantasy, Hellworld's methodical one-by-one stalk-and-kill skeleton sets itself dabbling into teen slasher territory, with added haunted house tropes and low-key psychological horror elements. As a Hellraiser movie, Hellworld undoubtedly knocked the franchise down a few years with its simplistic and cliche-battered plot, but I personally found little to argue about in the sense of seeing it as a slasher movie.

The factor that Hellworld still tries to be a Hellraiser movie did make it a rather interesting take on a common bodycounter. The supernatural aspect of the franchise is still present, taking up a good part of the scares both real and false, and there's a psychological tint in its direction which plays around with the dialogue and atmosphere, resulting to a faux-enlightened and partially surreal feel that sometimes work if it's not cheesing up some of the scenes or simply have them feel exploitative. The kills are satisfyingly messy even if they are simple, far below the usual splatter caused by chained-hooks and hellish machinations which itself is a clue within the story's little mystery as to why the Cenobites are so "tame" despite their extreme sadomasochistic nature.

The characters are mostly forgettable and underdeveloped, disappointingly true even regarding our villains who are normally the more notable bunch in a Hellraiser movie. In here, Pinhead and his cenobites simply appear, kill a teenager, say a cheesy one-liner and then disappear for ten to twenty minutes before repeating the process again. Even sadder is the fact this movie also happens to be actor Doug Bradley's last appearance as Pinhead, which is a shame seeing he played the character in all the previous seven movies with much flair and he is gradually wasted here. Lance Henriksen fills in the villain role for this entry instead as his character appears to be more in control of the situation killing our characters. (For a good reason but that's borderline spoiler territory!) Lance kinda works the part with the way he gave the character an air of mystery in his delivery and body language, sort of forgiving the matter that all he technically do here is talk like a James Bond villain.

And then there's Katheryn Winnick as our obvious Final Girl Chelsea. Not gonna say the character is one of the best Final Girls to appear in a slasher flick, but her misplaced wit (and shrieking) is pretty darn hilarious!

My copy's box claims this is Hellraiser's Most Horrific Tale and I completely disagree with that statement. (I believe Revelations deserves that title, though all for the wrong reasons) Rather, I find Hellraiser: Hellworld passable by junkfood horror standards and I really think it would have fared better if only it didn't desperately try to be a Hellraiser sequel. It's hardly scary or cosmically epic, but as a simple throwaway horror movie to pass the time, something that shouldn't be taken seriously and somewhat fun in a braindead level, there are far worse movies out there than this.

Bodycount:
1 male burned
1 female had her throat sliced open by buzzsaws
1 male decapitated with a cleaver
1 male impaled through a meat hook
1 male gets a spike shot through his head, exits to mouth
1 female clawed her neck open, bled to death
1 male suffers through an asthma attack
1 male frightened to death
1 male sliced into pieces with chained blades
Total: 9
Posted by Kaijinu at 2:11 PM