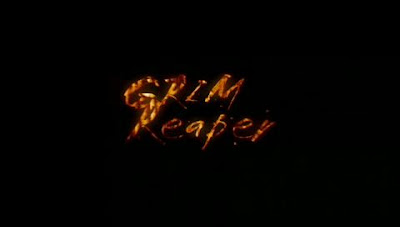 I like to think of this movie as the only proof we need why Death makes a better slasher villain as a string of Goldberg-esque set-ups instead of a physical killer.

In Grim Reaper, stripper (or perhaps a go-go dancer?) Rachel finds herself getting hit by a random cab, surviving it and somehow ending up in a nearly abandoned mental hospital. I say "nearly abandoned" because she is accompanied by the hospital's notorious administrator Dr. Brown and five other prisoners patients who all have near death experiences like her. Obviously, she wants out, and so do the rest of the patients, but Dr. Brown wants them to stay for a supposed experiment. Clearly this guy has nothing up his sleeves!

But as any true slasher movie out there, it leads up to a mysterious sometimes-hooded-sometimes-not figure wielding a scythe coming after them as the everyone starts to get killed off until Rachel, Dr. Brown and Rachel's concerned boyfriend are left to face a supernatural threat that is, who else, the Grim Reaper itself.

Now, I can welcome a little substance behind my bodycounters as you can only go so far with a formulaic slasher plot. Grim Reaper attempted this with psychological and (supposedly?) spiritual banter, questioning the nature of the character's situation as well as the characters themselves, but the unexciting premise, irritably cardboard characters, obvious mid-budget production and brain cell-rotting sluggishness easily killed any expectations of a good movie around the first fifteen minutes.

This is completely made worse by the fact that so many other plot points, from hallucinations, Faustian deals, fate and even friggin time travel(!) were thrown in and didn't really add up too well in the movie's attempt to make Grim Reaper look more sophisticated and philosophical than your average slasher. If anything, the film hardly made sense in the end! Never have I seen a slasher flick about a doctor striking deals with Death so he, in turn, can live a little longer or some shit liek that, be this needlessly complicated. Oh, what's that? I gave away a spoiler? Well, you ought to be thanking me coz I just saved your arses from the longest 82 minutes of your life! (Or, maybe one of the longest 82 minutes of your life. I'm sure there are others out there!)

So, positives? The Death looking like a killer mummy at the climax. For such a simple yet neat monster design, why waste it in this bore show? Why not have Death look like that for the whole time it was hacking and slashing? Was it budget concerns? Hard to tell, but one thing is certain: we need more slasher films with mummies in them! (I mean, we have plenty with werewolves, zombies, killer robots and even killer aliens. Why not a mummy? (And no, Timewalker (1982) does not count! No matter how slasher-influenced and fun it was...))

I have seen a good share of Final Destination-esque slasher flicks from the two Reeker movies to the passable likes of Jack The Reaper (2011), and most of them were watchable at best. Grim Reaper, though? This is one of the few titles that tried too hard and landed flat on its face. Over and over and over and over and over again.