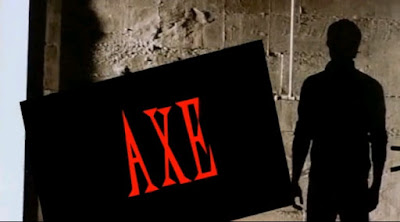 I've seen my fair share of rock-themed bodycounters and, so far, I only enjoyed a few cheesy titles like Hard Rock Nightmare (1989), Rocktober Blood (1984) and the "half-slasher" Trick or Treat (1986). Perhaps it's my taste for music and/or culture getting in the way, or perhaps most of the stories they come up with regarding rock stars meeting Friday the 13th-style deaths aren't entertaining enough for me, whatever is keeping me from fully embracing rock culture hack'n slash, it may have nothing to do with the mediocre feelings I have for The Choke. 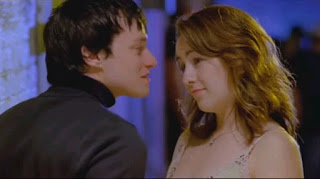 In this rocksploitation little number, a band called The Choke is playing at a nightclub, unknown to most of the crew that their lead singer and guitarist are planning to go solo afterwards, more or less splitting them up. This drama, however, will play second bananas in terms of big issues as, due to the club owner's sudden lack of alcohol to serve (...how?), the band and their little groupies find themselves abandoned inside the club, locked in and may have a deranged killer wandering around with them, hacking people to death with musical instruments.

On one note, I wanted The Choke to work. As mentioned prior, I don't usually enjoy rocksploitation as much as the next guy does but I do wish to break this streak once in a while and The Choke has somewhat of a potential to be at least "cheesy bad" given the terrible scripting and sloth-pace formulaic direction were paid off with a serviceable amount of gore and interesting characters. 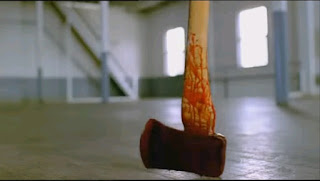 But nope. Instead, our thespians hardly emote and come out more annoying and dull, and the ways they meet their maker were only half-way workable. "Only halfway" because while I do like the splashy and gooey gore, the build-up to the kills were mediocre at best.(or was it worst?) The story was also near non-existent, tortuously padded with a lot of walking scenes and frustrating attempts to build some traits out of the paper-thin casts. I guess they were working up the tension and red herrings to make the supposed shock reveal in the end as effective as the low budget can afford it, but it wasn't really that interesting nor creative. Did we saw it coming? Maybe not. But with the way the film was handled, I really doubt I care either ways.

So with the only good to come out of this film being the little snippets of practical gore and it's few laughable moments of stupidity, The Choke choked as a slasher and perhaps sets rock'n roll horror back a few months. Can't recommend it unless you made it your mission to see every single slashers ever made. Should that be the case, then may the gods be with you, you magnificent bastard.

Bodycount:
1 male powerdrilled through  the chest
1 female found disemboweled
1 female hacked in half with a studded bass guitar
1 male found castrated and choked on a severed groin
1 male repeatedly hacked with a cymbal stand, stabbed on the eye with a drumstick
1male impaled on steel rods
1 male hacked to death with an axe
Total: 7
Posted by Kaijinu at 7:09 PM