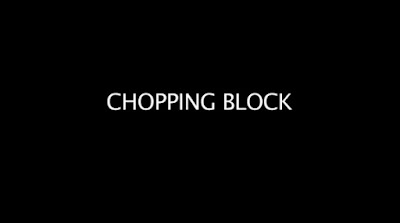 The advertisements for this movie pretty much made Chopping Block look like a bloody fun slasher comedy about five idiots planning their first kidnapping, only to somehow mess it up and end up being hunted by your everyday horror movie maniac. To be frank, Block is exactly that, but not in a genre ratio that will cater to those expecting a full-on bloodbath. (Me being one of them...)

Due to the carelessness of their section leader, five colleagues find themselves fired from their job and, while getting drunk to numb whatever sorrow they were feeling at that time, thought up a plan to kidnap their boss' supposedly spoiled daughter and hold her for ransom to get even and get rich at the same time. In a slight shred of insight, however, these guys didn't go through the plan until, that is, they eventually realize that life in underpayment (or no payment) is and will get pretty hard. So following a quick internet search for your basic kidnapping scheme, our five would-be criminals psyche themselves up for their first score as ne'er-do-wells, plotting everything from barely visible animal masks to hide their identities to an abandoned warehouse that even a pizza guy can find to keep their victim at.

What they weren't expecting at the day of their crime, however, is to find their hostage walking home in a state of daze, suspiciously covered in the blood of her now deceased friends. Ignoring this and still going through with their plan, our group will soon find out that they just got themselves in a bigger clusterfuck of trouble when the maniac responsible for their hostage's current state followed them, ready to do some more killing.

Now, I will say that Chopping Block is a good movie for what it is mostly, and by that I meant it is mostly a well written and passably acted comedy with the horror elements playing very late into the story which, even by then, was hardly touched in context.

The movie focuses more on the mishaps and clueless nature of our five leads as they ready themselves for very first crime, a plot scripted and paced in a rather believable approach as it points out the troubles of going through something one may not have the edge to do, even more so when one barely have any knowledge about it. This normally works best when the characters and the actors portraying them can carry their roles with a level of likability and wit, and while a few of our leads did possess one-note personalities, I have to say that the comic timing and interaction between these casts were interesting and quirky enough to keep me grounded on the story, so much so that I begin wonder if they will succeed with their plan or if they will all die a horrible death under the hands of an masked murderer.

Sadly, once the advertised slasher elements were finally introduced, it was around the hour mark and, Block being just 80 minutes or so, a few scenes away from our ending credits so it barely made any significance to the plot by that point, so much so that it actually felt rushed and rather pointless. This is quite underwhelming for me seeing that the villainess looks really cool with her masked hag look and intimidating presence, plus (again) the advertisements made it look like she and her axe-hacking talent will have a bigger part for the film. It's this lack of promised carnage that leads me to compare this movie with a similarly plotted (and, personally, better) 2006 slasher comedy, The Cottage; both films involve a kidnapping gone slasherifically wrong, only Cottage has a fair measure between horror and witty comedy, giving us three of the most unfortunate criminals to laugh at and root for, as well as a cool looking slasher with a fairly serviceable amount of blood and killings. Block does have a better development and arcs for it's characters compared to that movie, I will give it that, but when it comes to the horror elemts, I think it needs more work.

As a low-budget comedy, Chopping Block has some to offer and I will say it is worth a look. It has a great set of casts and writing with more hits than misses, an overall fair movie to enjoy if you are up for a night of hilarous errors. But if you're looking for gory splatstick and some decent slasher action to go with said jokes, the best you will get from this movie is a drugged-up nerd licking a delicious wrist stump. His wrist stump. If you want more than that, then I may recommend the aforementioned The Cottage or even the under-heard Botched (2007), another slasher comedy about a heist gone terribly terribly wrong.