The Curious Case of a Homicidal Pianist: Phantom of Death (1988) 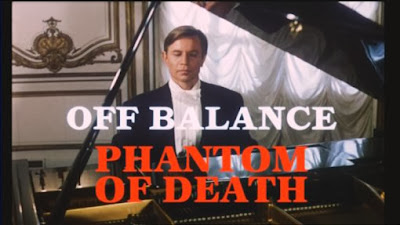 After doing 1986’s Italian backwoods slasher Bodycount, Cannibal Holocaust director Rugero Deudato puts his directing skill into the bodycounter genre once again with this odd three-way offspring of a slasher, a giallo flick and a body horror.

Michael York plays Robert Dominici, a pianist suffering from a rare genetic disorder that rapidly ages his body, giving him, in turn, a violent streak. From time to time, he succumbs to the condition, driven into fits of rage that had him committing various uncontrolled murders and getting away with it as eyewitness descriptions failed to match his actual age.

Hoping to end the madness himself, Robert races against time to find a treatment for his state, all the while Inspector Datti (Donald Pleasence) tries to solve and connect the murders to him, in hopes of finally stopping the slaughter.

Story-wise, The Phantom of Death is more or less a story of a man attempting to stop the possibly unstoppable, with a good chance of the resolution mostly involving him giving in to his condition completely ala Brundlefly in David Cronenberg's The Fly. It did try to play around with the identity of the killer ala whodunit for the first few scenes, but it becomes rather obvious eventually that the story shifts into a narrative following our antihero and his ordeal.

With the physical, psychological and even emotional effects of the character's sickness being the primary focus of the film, most of the scares here were more on the lead’s personal body horror rather than the exploitative killings. It's not much given the film's budget, but the make-up effects used for York's unnatural transformations do fit with the movie's tone and theme, something that is rather uncanny with it's little touches of believability and York's body language. This isn’t to say that the film is short on bloodletting as it did provide its good share of impressively bloody dispatches, but compared to the anguish and troubles our anti-hero is going through, the killings only come as a little something extra catering to the bodycount fans.

Sadly, with the plot's focus on the character's deteriorating mental and physical state, this unfortunately meant that the pacing gradually slows down the further the movie goes, eventually slugging its way to a finale wherein a really aged Dominici stalks and attempts to kill one last victim, his mistress, which is as exciting as watching weeds grow. A slight disappointment considering the movie's excitingly bloody first half, but I guess it is to be expected if your villain sporadically ages in a matter of days.

It's not one of the finer giallo or slasher entries, but with a ridiculously farfetched plot and some workable talent in play (though Mr. Pleasence looked rather too old to play a character whose daughter happens to be in her teens), Phantom of Death did rather alright as a cheese-tainted low budget body horror bodycounter.