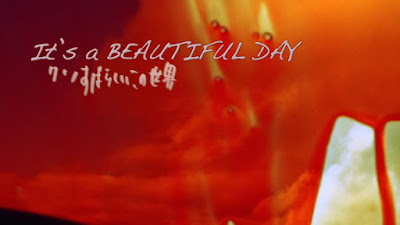 Some of the best slashers out there play with the idea of absence to make itself creepy (if not scary), such as the absence of reason why Michael Myers stabbed his sister to death one Halloween night, or the lack of explanation to how Jason Voorhees suddenly turned up alive when, all of these years, he was assumed dead. While reasons and/or origins would later come in through either sequels or reboots, one cannot deny that a good air of mystery surrounding a villain is a great key to work with in making them memorable, even more when everything else in the movie incorporates well with the enigmatic plot point. For the movie I will be covering here, It's a Beautiful Day, that doesn't appear to be the case though.

This Japanese/American horror flick starts out like your typical slasher with two thieving, homicidal brothers murdering a lost tourist couple in the middle of a deserted road. The familiar sub-genre footing continues when we are then introduced to Ah-Jung, a Korean student studying English in the States, who finds herself joining five party, booze and sex-obsessed Japanese students in a rented cottage in California.

Sticking out like a sore thumb, Jung tries her best to either get along or move away from her careless and care free companions, not knowing that the murderous brothers have now set their sights on snuffing out the group, believing they have witnessed one of their crimes.

Halfway into this massacre, we're suddenly (and notoriously, if I may say) thrown at a plot point that came out of nowhere as one of the brothers suddenly gains the ability to switch bodies. No clear indications as to what led to this supernatural power, nor did the film bothers to explain this in the end, but it wouldn't be so bad of a turn if the direction tries to make something out of this, creating something positively unusual to this otherwise typical slasher. (Maybe a more teen slasher-y Shocker (1989) or The First Power (1990)?)

Sadly, director and writer Kayoko Asakura failed to see the potential mayhem a body-switching slasher flick could have unleashed, choosing instead to have the understandably confused and body-swapped brother whine and shout at terrified victims for an explanation, while his more murder-happy sibling hacks his way through the cast while spitting racist venom, not knowing that one of them is really his lil' brother in a Japanese girl's body. By the time the story eventually embraced the concept of a body-jumping killer, this was around the last few minutes of the movie where the rest of the bloodwork already happened, a gruesome set of gory demises that could make up for the missed opportunities.

In fact, Beautiful Day can be an okay horror flick if you can look past its many others flaws apart from the unexplained supernatural angle, mainly the kinda distracting Japanese-versed English, the lack of any real sympathetic characters and the few under and/or overacted scenes. (One guy had his legs chopped into pieces and yet he sounds like he just scrapped his knees) There's a generous abundance of practical gore effects and with the movie being only 78 minutes long, the plotting actually breezes through nicely despite a few bumps. The racism angle is pretty limited to just name calling so I didn't find it as upsetting as it should be, but at least they tried to make an intimidating trait out of an otherwise standard axe murderer.

Honestly, It's a beautiful Day could have been better if it thoroughly understood what it really wanted to do with the sub-genre; on one part, I can tell they want something different with its inclusion of body possession, but they also seem unsure how to go with it on another. In the end, Day is just a forgettable and replaceable bloody outing that, fairly on its part, is still watchable for the grue and oddities, but nothing else. For more body-switching hokums, I may suggest the underrated The Ferryman (2007) if you want a bodycounting psychological run or Shocker (1989) if you're into some cheesy laughs.