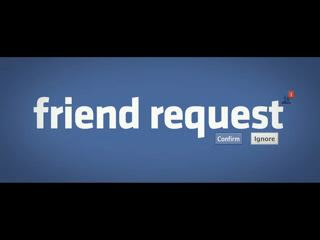 Not to be confused with the underwhelming 2016 German horror, or with the many other short horror films out there titled "Friend Request", this little number has us trailing along the familiar hack'n stab horror sub-genre that is a short slasher flick.

In here, Dave Jenkins, a shy horror junkie, sees a trailer in Facebook for an upcoming indie flick by a certain Jeremiah Kane. Upon "liking" it, he unknowingly sets into motion something deadly as Kane himself manages to track Dave down and plans to murder everybody in his path for a good old-fashioned snuff flick!

Now, Friend Request is no step up as a slasher as everything about it is almost as basic as any bodycounter film could be, with a slightly neat premise and a downright odd ending.

The characters are mostly the meat-for-murder type from the nerdy awkward hero to the cool death-deserving jerk, which, sadly, the same can be said for our killer, who sports a monster make-up and rubber monster claws, while spatting out taunts and maniacal madness. It's never a good thing for a movie of this type to have an unexciting killer but so long as the guy can dish out some blood and guts creatively once in a while, as well as tie everything up in the end with an unexpectedly funny take, then I guess I'm sold for the moment.

I can see a lot of potential to the good folks behind this short as the production looks pretty darn good for a short flick; from practical gore effects and crisp looking camera work, I say, with a little more running time and more structured story, Friend Request would have done great as a feature length horror flick!

Bodycount:
1 female smothered to death
1 male found with a keyboard shoved into his gut
1 male ran through with a machete, decapitated
1 female had her throat slashed with a machete
Total: 4
Posted by Kaijinu at 10:09 AM