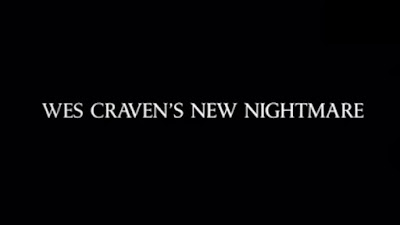 It's funny to ponder that if the studios have agreed with the late Wes Craven, the director and writer of the original Nightmare On Elm Street, to not franchise his monster, Freddy Krueger, we may not have the same kind of Freddy so well recognized today. For all we know, he could have remained in the shadows and started, instead, a darker and edgier take on future quip-spewing maniacs. But, the obvious truth is he didn't; Freddy branched out and became a household name that either brought fright or delight to those who hear his name, depending if they remember him as a vicious child murderer that kills you in your sleep or a wise-cracking monster with outlandishly cartoonish powers.

Thankfully, Mr. Craven decided to direct his monster one last time for the 90s. A meta-take on the series that placed Freddy back in the shadows in a hauntingly good way. 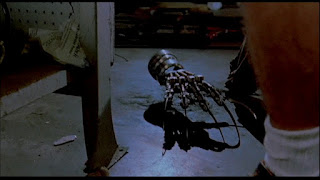 Set in the real world, it's almost the 10th Anniversary of A Nightmare on Elm Street and one of its stars, Heather Langenkamp, is currently dealing with not only an obsessed fan who have been phoning and mocking her in Krueger's voice, but also a series of vivid nightmares that seems to hint the presence of Freddy himself. Dismissing this as mere stress, Heather would soon realize that a new Nightmare film is in the making and her husband Chase Porter (fictionally in this movie) is one of the film's special effects artists.

Adding for the worse, their son Dylan slowly begins to act strange as he quote Kreuger's lines and gets nightmares wherein the burnt maniac appears to be preying on him, despite never seeing any of the Nightmare movies. After the boy goes through a rather violent and disturbingly cryptic fit, Heather begged Chase to come home from work one night, only for him to be killed in a car accident that somewhat left him with a peculiar looking mark. One that resembles a ghastly clawing.

Soon, Heather would learn that Freddy Krueger himself is attempting to break into the real world and has targeted her in a way to destroy the only one who could defeat him. When her son gets abducted by this monster and reality itself begins falling apart, it's up to her to become Nancy Thompson once again and finish the bastard son of a hundred maniacs once and for all.

First, I will start with the flaws since from my eyes, this movie only has a few. For one, being a film of near-two hour run, Wes Craven's New Nightmare definitely has a lot of time to fill up as a slasher movie of very limited kills. If anything, calling this a slasher is a really big stretch since it more of a psychological character and situation study with a supernatural and fantasy tone, focusing on Heather Langekamp's fictional portrayal of herself and her attempts to understand and cope with a predicament that the parallels real world terrors. 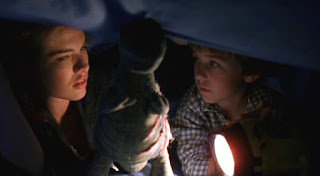 This being said, the film is brainer and a lot more philosophical than the standard teen-kill, tackling subtext such as violence in media and how it affects not only its audience, but also those involved in making them. Heather's character, for one, is a young mother trying to stray away from her past as a slasher flick actress for the sake of her son, but finds this difficult as the past keeps coming back to haunt her, either in the form of a sinister voice over the phone, the undying love of a fictional murderer among its fans, or an ancient demon hellbent on destroying everything she loves. In the end, she learns that she cannot escape this darkness and learns that she has to face and fight it despite the odds, calling forth bravery and sacrifice that is well implemented with a gothic fairytale (Notice the Hansel and Gretel references?) and some mythology subtexts. (Apparently Craven's inspiration)

It is an odd path to make after the other Nightmare on Elm Street movies, but the idea is fresh for the time and made this one of the few movies in a series to approach this with take much thought, atmosphere and emotion. This is where New Nightmare shines through as a horror flick, taking its audience in places so rarely ventured upon by a film of its kind, challenging its viewers with ideas and themes that may appear straight out of it's franchise, but worked around to create something entirely different, far more sinister and more mature.

In terms of production, New Nightmare is just phenomenal; the score is hauntingly majestic and epic, especially around the climax where the film took place in a world resembling the ruins of Roman empire, sporting a thunderous opera. Cinematography and visual effects escalates in quality the more the movie inches to the final fight. (Even if some of the body horror effects looked a bit rubbery) The direction is among Craven's best as it gave us enough momentum to feel through the dread our protagonists are going through, may it be subtle or downright obvious, simply foreshadowing a true evil waiting around the corner, which might as well be the case seeing Freddy is literally everywhere.

The casts, in turn, are among the best portrayals I've seen, especially Heather Langenkamp in what could be her best role (then again, she is playing herself) and John Saxon in a rather more likable and warmer approach to himself as a good friend to Heather. Miko Hughes is one of the few child actors that surprisingly didn't annoy me so that's a big point for him. Heck, I would even admit that the most grueling part of the film for me is when little Hughes found his stuffed dinosaur slashed up by Freddy and crying out for it; I dunno why but the image of a child screaming for an imaginary protector when real horror is afoot really tugged my heartstrings. Perhaps I can relate? 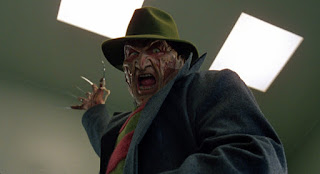 And speaking of which, Freddy. Goddamn Freddy Krueger. In a way, we have two of him in this movie, both played by Robert Englund with one being a fun-loving movie monster who makes a surprising yet welcomed cameo appearance, and the other being an ancient force that seems a little too clean in terms of looks but nevertheless atmospheric, more savage, and less goofy. (Seriously, why does Gap Freddy look so clean? Least the coat looks awesome, why can't modern Freddy wear that in the new films?)

If there is anything I didn't like about this Freddy though (apart from slashing up poor Rex. Rest in pieces, stuffed dino), is his new glove. I know this was one way to tell him apart from the other Krueger but why can't he use that robotic claw at the opening? That idea is just pure win! Eitherways, at least the murders he unleashed were among the most slasher-esque in the series; they maybe few, but during those little moments when we get to see some blood drawn, they were savage and tragic, just like killings of the old Krueger before he became the slasher equivalent of The Looney Tunes' Wile E. Coyote. (No nudity or gore, however. But I never really saw a place for it in this movie) Though we do get to see him go a tad cartoony such as stretching his tongue and unhinging his jaw like a snake, thankfully we only get a few of these moments without killing any tone this version of Freddy is trying to accomplish, and accomplish he did despite his little screen time.

With many nods to the series here and there, New Nightmare is a welcomed entry to this franchise that dares to be different yet clamoring enough love for the original that it almost acts as a tribute movie made by a very creative and imaginative team. Wes Craven really outdone himself with this love letter of ghoulish proportions to the very movie that sparked his fame among us horror junkies and I believe, as a fan of both Craven and of this series, it will be criminal for me to not recommend this. If you want something different for your buck, your slasher needs, or is just darn curious what exactly is the fuss about, I will say give Wes Craven's New Nightmare a spin. It's smart, atmospheric, genuinely scary and it has goddamn Freddy Kreuger in it!