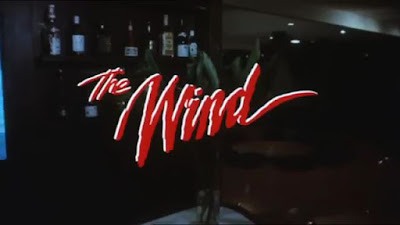 From Nico Mastorakis, the Greek director known for the 1986 action/slasher hybrid The Zero Boys and the 1976 mean-spirited exploitation Island of Death,  comes this odd direct-to-video piece about a man, a woman, and the most antagonizing winds in cinema that wasn't a tornado.

Sian Anderson (Meg Foster) is a writer who needed some peace and quiet to work on a new book, moving from her posh Los Angeles pad to visit a strangely deserted Greek town known as Monemvassia. There, she settled in a cliff-side house and was warned by the landlord that the winds at night can get ridiculously strong, so he highly advised her to stay indoors by then. She did exactly that, but not before encountering a strange handyman named Phil (Wings Hauser) who claims to know a thing or two about death.

This turned out to be less of a bluff when Sian later spots him burying the freshly murdered landlord, thus a deadly game of cat-and-house begins. With the winds cutting her off from reaching help, can Sian survive the night against a sickle-wielding predator?

I guess I'll start with acknowledging the elephant in room as while The Wind is an intense slasher/thriller hybrid, it's not without some pretty distracting flaws. For starters, there isn't much of a story to work with since it's really no more than one long slasher climax wherein the lead girl gets chased all over the house. Right around 20 minutes into the movie, we get our first kill and the stalk-and-chase comes after like a steady stream, cultivating to set-pieces that I would go as far as compare with the trap scenes from the Home Alone movies, complete with Foster's character utilizing available household objects and spatting out one-liners in every chance she stops the killer from getting in.

As smug and plotless as I find this, I guess this kept the film straightforward and rarely boring but at a price that the tone can get uneven, leaving little to no clues where all of this was heading to. There is actually a slight nod that says all of this might just be in Sian's head as she did managed to write about the landlord's death with impossible accuracy, but we never got any clear conclusion regarding this. Anybody else who encountered the killer handyman ended up dead and the movie itself finishes with an underwhelming take with an openness so wide, one would just question themselves what exactly did they just saw.

However, despite the story making little sense in the end, The Wind is still a decent thriller with a minimal yet workable bodycount and a lot of fair stalking and small-scale siege scenes. The script, as I mentioned, can get clunky, doubling in corniness with the performances of our two opposing characters. Thankfully, if it hits right, it's a fun ham-ride that does well with a side of buttered popcorn and some sodas.

I also came to love the scenic quality of the movie and too the decent cinematography that goes well with it. Perhaps if it had a more thought-out plot, it could have been a better flick, but I will give The Wind a pass for trying to break some of the home invasion/women-in-peril slasher tropes, even if the end product mostly resembles one. Let this wind guide you to and through a strange time if you get a chance to catch it!