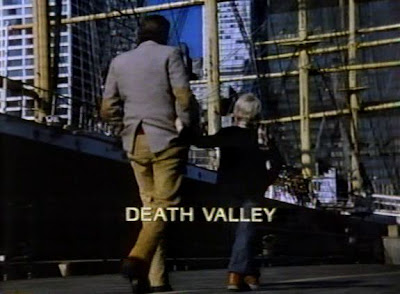 At times, simplicity in a plot can go a long way if executed rather unconventionally.

From a glance, Death Valley doesn't sound like your typical slasher flick as it doesn't deal with busloads of teenagers driving to their doom, but instead we have Billy, a young boy from a divorced family, being sent off to a holiday with his mum Sally and her childhood bud-turned-boyfriend Mike, which he obviously isn't too excited about as he would rather spend some time with his beloved dad.

Determined to give the boy a good time,the Sally and Mike decided to drive through the near-barren Arizona desert to visit a Western themed novelty town, which the kid is a fan of. Amidst their trip, they stop at the titular Death Valley to take a break, wherein Billy stumbles upon a seemingly empty mobile home and picks up a peculiar looking frog necklace. Unknown to him, however, the necklace belongs to a serial killer who just recently murdered the van's occupants and, after being made aware of this little slip-up, is now determined on snuffing the life out of the kid, and too those who got in the way.

For a good slice of the run, Death Valley focuses on the dynamics between lil' Billy and the trying Mike as they awkwardly attempt to either trust the other or be trusted. Sometimes these building moments can get a bit cheesy and half-hearted, quite not sure if it is intentional or the acting was a just tad off, but it does call for some developments rarely tackled by slasher flicks of its decade, showing both boys as flawed yet understandable in the simplest manner. 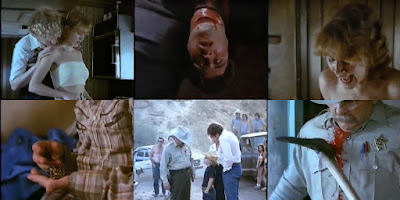 This transitions quite nicely to the slasher portions of the movie, pretty much starting as early as with Billy stumbling upon a murder site and going on close calls with one intense scene involving the killer spotting the bespectacled Billy alone inside one of the attraction and began shooting live rounds at his young target, who in turn not knowing that it was for real. Things did subdue for a bit once a while, but it got the ball rolling again no soon after with Mike and Sally going on a date and leaving little Billy alone at a motel with a hired sitter. And we all know how sitters end in a film like this.

What soon leads is a third act filled with fairly entertaining stalk-and-hunt sequences as Billy finds himself prowled upon by a loonie who spouts obscurities and loves to tap dance on rooftops. As silly as some of these scenes are, they are equally fun and tense as the killer has no problem just how unhinged he is, destroying anything and anyone ust to intimidate his targets and even packing a nice but slightly foreseeable twist regarding the him.

Overall, as a slasher, Death Valley tries to play a different game by broadening its casts as people rather than just characters. Though this seems only applied to the main leads, it still works quite an advantage for the movie as not only we learned to feel for the leading family, but it also brought something new to the table, at least for its time when nearly all slasher victims are dumb horny teenagers. In turn, the film is hardly that scary, barely high in the bodycount department and some of the kills were on the tame side, but if the final product is a steady flow from point A to point B, with bloody good stalkings and killings to boot, I'm okay with it!

With all of this, I say Death Valley is a worthwhile watch for slasher fans and for willing horror junkies who wouldn't mind some cheesy family drama on their dead teenagers. Tame as it may be, at least it has character!