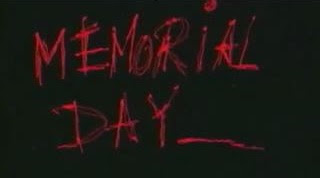 As of writing this, I was planning to have this review posted exactly at May 30st, the 2016 American Memorial Day, but seeing what exactly this movie had to offer, why bother?

Even funnier is the fact that I actually have this movie in my files since June 2015 but I've completely forgotten about it until just recently when I was cleaning up my hard drive for data space. Sad to say, it was then that I decided to try and survive this movie for the experience and a review before I throw it away, knowing how bad its reputation is among most slasher fans.

The plot is as bastardized standard as it could get; a group of teens go to a lake for Memorial Day weekend, the same lake wherein the brother of our obvious survivor, Rachel, drowned three years ago. Rachel blames herself for this accident but decided it's about time she face her demons and join her friends for some fun. Of course, someone in a plain papermache mask just happens to be there with plans on killing them, leading to an end reveal that gets considerably confusing for a cheapie like this. Perhaps it was desperation to make something out of the paint-by-number story?

If it was, I wouldn't be so surprised; Memorial Day is hardly anything. It's hardly horrifying. Hardly scary. Hardly fun. The characters and their portrayal are a joke, the kills only have one or two moments of impressiveness (but even those moments have their own questionable qualities), and the whole movie just looks too cheap despite the valid attempts to make it look artsy and/or gritty. There is no hiding that this movie was done on a budget and in dire need of an acting and writing course, but seeing the effort the production put into the killings and (perhaps too much) the twist(s), I will say they were at least trying something. It's just too bad that they did the whole film so blandly that these little slices of creativity are understandably overlooked and the final product considerably barely favorable to its target audience.

So yes, Memorial Day is, just as the next horror junkie would probably say, much nothing to work up about. Easily replaceable by other better backwoods slasher titles (especially Friday the 13th (1980)) and best to be pushed back as an obscure memory.