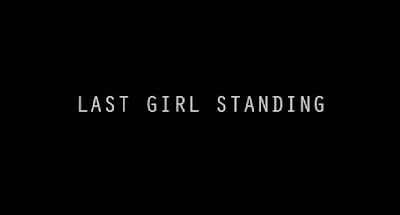 Ever wonder what happens after the horror movie? After the killer is dead and the final girl walks away with all of her friends slaughtered?

Some slasher titles answered this via sequels such as the likes of Hatchet, Wes Craven's Scream, My Super Psycho Sweet 16 and even Friday the 13th at some point. More or less, the conclusion they all drew have their survivors either broken or facing the monster all over again, rarely meeting a happy ending.

Last Girl Standing tries to look into this scenario with a tad more drama and psychological angle, telling the aftermath of a backwoods massacre perpetrated by a masked psycho simply known as The Hunter. It's only survivor, Camryn (Akasha Villalobos), who was also the one who ended The Hunter's life and reign of terror, now live a existence tainted with survivor's guilt and post-trauma, inevitably at the cost of her social life.

When a new employee named Nick (Brian Villalobos) arrives in her workplace one day and shows an obvious liking to her, Camryn finds herself unable to comprehend what she should feel about this apart from fear and anxiousness. Worsening this are the sudden visions of The Hunter seemingly back from the grave and out to get her, but Nick’s posse of friends, especially the cheerful Danielle (Danielle Evon Ploeger), assures her that it's all in her head and The Hunter is indeed dead. Insert a loving homage of Friday the 13th Part VI's opening here and a small party there, and Camryn is cured of her trauma.

And then the screaming and dying starts.

Think Rob Zombie's Halloween 2 if only Laurie was less atrocious, Last Girl Standing is only a slasher flick at the beginning and at very last act, taking a good run in the middle more as a character piece focusing on post-trauma and its effects in a near realistic way. We see our lead go through a barrage of emotions from fear and anger, to hopeful and apologetic, as she tries her best to fight off the scars left by the worst night of her life, leading us to paths that we could only guess where it will all end up to. This works as a hefty advantage for the movie as Akasha superbly plays her role with much empathy and realism that, despite how odd it is that her world seems pretty open to the fact that the killer she fears looked like he came straight out of an 80s B-grade slasher, we can feel and understand her plight.

Sadly, the further we near to the finale of this movie, the more predictable the plot becomes and most of the acts involved can be regarded as momentary red herrings that did little to mask what was coming. Seeing we begin all of this so coldly and our lead cast spends more time sulking, some scenes around the third act almost seem too "rushed" and too happy that you can't help but feel there's something else up. And, true enough, Last Girl Standing remembers that it is still a slasher and victims are a must, picking off and attacking the conveniently one-dimensional posse full of slasher victim archetypes (including a not so surprising new final girl) and even going full circle on us by ending with what appears to be another hopeless situation. This may not stick well for those expecting an overall happier ending or an uber realistic plot development, but for those who just wanted something a little different without straying too much from what they came to watch, the movie's troubling last act might be worth the wait. (As it was for me)

Looking at it, Last Girl Standing is a decent production; with beautiful camera work, steady potboiler tone, effective gore, competently edited story and interesting main casts, the film's slow burn and rare occurrences of cheese are mighty forgivable with the aforementioned mountainous pros and it is clear that its crew earned whatever merit can be offered. The only real matter here (aside from the predictable last act mentioned prior) is whether it will cater to everybody's taste.

Those egging to see a by-the-book hack fest from this movie might be disappointed, but if they can open up a bit, willing to try something different, or just be patient enough to sit through a boiler pace simply to see a bloody massacre unfold, I say give Last Girl Standing a run and see a gritty possible reality our slasher survivors might go through.