When The Ripping Goes West: A Knife for The Ladies (1974) 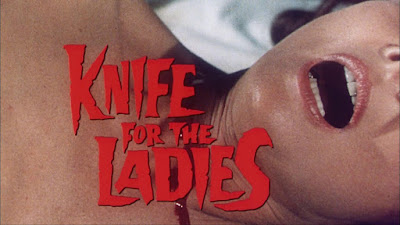 It's1882 in a small southwestern town of Mescal and a knife-wielding killer is taking the lives of local prostitutes and no one, not even their local sheriff Marshal Colcord (Jack Elam), seems to know who the culprit is.

Understandably worried, the town official goes to the city and asks Ed Burns (Jeff Cooper), a young investigator, to take over the case, much to the immediate disagreement of Marshal. The two is in no friendly terms due to this, landing blows of criticisms and punches at one another, but when the slasher takes more victims and a man is wrongfully hanged for the crimes, it seems that the town is growing shorter in number and in patience, and the two lawmen have no choice but to team up and finish this reign of madness before its too late.

An early western genre-bender with a murder mystery and buddy cop taste, A Knife for the Ladies is a simplistic 70s cheese ride that dabbles enough elements from the genres it is mixing to result an okay and easily digestible plot, more or less a murder mystery set in the old west, tackling little cowboy cliches of bar brawls and gun fights (so little that I only counted one shoot-out and one fist fight), and focusing more on developing some of its characters and the build up to the identity of the killer.

However, it is still easy to see why A Knife for the Ladies is such an obscurity among the horror community, too, as it's also hardly violent and exploitative enough to satisfy one's craving for gore and sleaze. The horror elements are instead an easy bunch, pretty much standardized stalk-and-stabs that looks unremarkable and replaceable by other better proto-slasher hokums, and sign of sleaziness are reduced to one boob shot early in the movie. Still, this isn't to say the film failed to be entertaining for its worth and I am quite satisfied with the 30s/40s pulp fiction feel of the story as well as the talents involved.

Usual movie baddie Jack Elam took a developing role in here as the gruffy and uninterested sheriff Colcord who started out as a sloppy and temperament character, but later has a change for the better after drunkenly mistreating a son-figure and ending up having a fist fight with Burns.

On the opposite side of the coin is Jeff Cooper as Ed Burns, a detective with a deductive skills to rival. As much as I want to like this character, his development in the story was on a steady roll and he's just the smart and good looking contrast with Elam's character. There aren't much flaws to this character aside from clashing early with the town sheriff and he is relatively the same from the beginning to the end. Nevertheless, Cooper does a fair job sustaining the figure's presence, even if he wasn't that explored.

The writing for these two leads is one of the best elements of the movie, the other being the actual procedural itself that while may be boring for some, it is still a decent watch in a TV thriller sort of manner. And as any murder mysteries, we also have a set of red herrings such as the former deputy-turned-bar man, a surgeon, a barber-slash-mortician, and even Mescal's founder, an old woman who lost her son to the murderer. These characters have their run as possible suspects but with the way they were portrayed, it soon becomes a tad obvious who is and isn't knifing around the town's brothel. I will say, though, that some of them did lead to some interesting plot points on the film and they're played fairly for a bunch of standard casts.

I do wish we got more of these main and/or recurring characters involved with the horrors or at least have the climax more engaging than be a slight hybrid of Friday the 13th (1980) and Psycho (1960) endings, but nevertheless, even if the film couldn't do away more blood, gore or bodycount, the final product is far from terrible.

A Knife for The Ladies is pretty much one edited boobies away from being a TV movie with cheese, character drama and lite murders. Think Murder She Wrote with Jessica Fletcher replaced by a wall-eyed drunk sheriff and a 70s Doctor Who clone in the old American west. It is not a perfect viewing experience, but it is bearable to say the least, thus only recommendable to very open or patient genre fans.