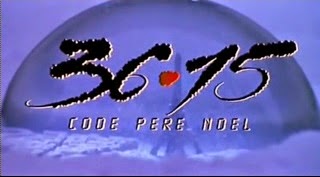 In 1990, Home Alone was released in American theatres. The film concerns about an 8-year old boy accidentally left all alone in house when his family flew off to France for Christmas. He then discovers the hardships of responsibility and has to defend his home from a duo of bumbling idiots, all while spouting one-liners.

As cherished as it is as a holiday favorite by many, us horror (and thriller) fans knows a dirty little secret behind this film: France already beat them to it! Enter 3615 Code Pere Noel, a thriller following a similar plot, yet with a dark twist of its own.

Thomas is the son of a successful business woman and the grandson of a diabetic (and blinding) Grandfather Papy, whom the boy cherished as a beloved father figure. He is a boy of familiar interests such as video games, playing as Rambo with his dog, fantasy role playing game and a fascination with Santa Claus, but what sets him apart from other children is that he's a whiz. Not only is he capable of fixing cars and setting up security cameras, but he's also fully equipped to create remote- operated booby traps and secret passage ways that's all over his house.

It was one Christmas Eve when Thomas' mum had to go to work and may spend the whole night at her office finishing it all. With Papy and his dog as his only companions all through that evening, he decided to stay up late in hopes of capturing Santa on video to prove his existence. But unknown to him, the company where his mum worked at just fired a disturbed vagrant, who was hired the same day to dress up as Santa only to get too physical with a girl.

Wanting revenge, he hitched a ride on  a toy truck headed to Thomas' home and, after a quick killing spree bumping off the driver, a cook and a  gardener, he sneaks down a chimney and landed in front of a hiding Thomas, giving the child a sense wonder and delight...

...until "Santa" stabbed his dog on the throat with a cake knife. God, I hope that's not a real dog cuz it was graphic! Now alarmed, Thomas wakes up his grandfather and must spend an entire night in a fight for survival against a dangerous murderer, hellbent on revenge.

What sets Pere Noel apart from its American cousin is that it's darkly serious; Home Alone plays a family friendly version of a home invasion movie by setting up a witty (and sometimes obnoxious) kid against two harmless thieves who some how can survive traps that can definitely kill an ordinary man. Pere Noel goes through familiar trappings but with a child that's believable despite it's cartoonish high-tech skills. Thomas may have the capabilities of using his intellect and resourcefulness against a mad man but deep inside, he's frightened of the situation not only for himself, but also for his grandfather as any child would. The bond Thomas have for his grandfather is what drives this film in terms of warmth and thrills as the two characters are given enough scenes showing how close they are as a family, even before the nameless killer reared his spray-painted ugly face into the picture and by the time he did, much of the tension was placed around the boy's attempt to keep his granddad away from harm.

In turn, the killer here is no idiot who's calling card is to fill up basements with running water, but a homicidal maniac and child abuser who might be one of the better Santa-themed villains out there. He's frightening, merciless and clearly unhinged, seen with the way how he lacks any hesitation to kill Thomas and Papy whenever he almost got the chance.

Heart-warming and yet terrifyingly intense, Pere Noel is a title that deserves to be known out there if it wasn't for the risk of being compared to Home Alone. To be fair, Pere Noel came out first (released in 1989 for the Laon Film Festival of Youth and Children's Films, then nationwide in 1990) and it is a wonder whether Home Alone's writer John Hughes had taken a few influences from this film. Nonetheless, this French thriller is visually stunning and well-developed enough to make a personal impact, though I do have a few gripes on some slow scenes in the middle, a minor flaw compared to its respectable final result. (Plus it has Bonnie Tyler singing a soundtrack for the film! As a fan of 80s music, how is that not cool for me?!)

If you want something different to watch apart from your usual Christmas specials, or just wanted to see something very obscure to add in your horror/thriller watch list, feel free to seek out 3615 Code Pere Noel. It's not the best film to come out of the country, but it is an entertaining piece of work that truly deserves to be discovered.