The Attack of Rambo Bates: Possession: Until Death Do You Part (1987) 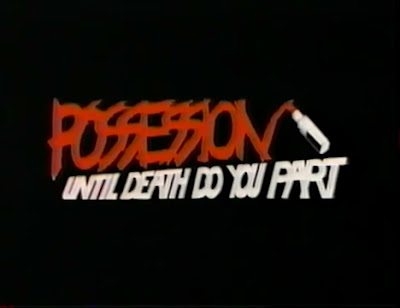 True to most cases, a collector's pride is to own every single thing that can be added to their hoard, no matter how rare or obscure it is.

It adds a sense of challenge and thrill to what could be a strange hobby and for that matter, I do consider this slasher collection of mine as my only successful stash (even if most of them are digital downloads) and this blog, one of my records of this feat. (The other record is a set of journals where I listed the titles and death toll. Yeah, I'm that kind of weirdo) From time to time, I do get to see some of the rarer and obscure titles to be released under this sub-genre, some of which are hard to get by and generously provided to me by some cool peeps out there who shares my passion and are lucky enough to get their hands on one. Among them are titles like Shock-Diversão Diabólica(1984) , City in Panic (1986), Posed for Murder (1989) and Deadly Sins (1996).

Possession is a low-budget cauldron of melted cheese with Psycho (1960) and Friday the 13th (1980) as its main ingredients; the first half hour has Frankie, a psycho who lives with his mum and has a deadly fixation on finding the perfect girlfreind. On this night, he is playing around with Madeline, a woman he kidnapped from a nearby parking garage, forcing her to wear his mum's clothes before going at a childish fit and storming out when Madeline did not wear it right.

During this leave, Frankie is lectured and warned by said mum (who apparently is well aware of her son's obsession and murderous streak) that she'll leave him "just like the others" and true enough upon his return, Madeline managed to escape and ran all the way back to her friend's apartment. This sets Frankie to murder his own mum out of rage and hunt down the one that got away, only to be chased down by pursuing cops after they were informed of his deeds. It all leads to a shoot-out at some docks, where Frankie's getaway rowboat explodes after being shot multiple times. (Yes. Apparently, 80s science involves rowboats that explodes when shot repeatedly enough) 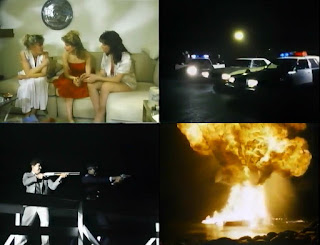 Assuming he's dead, the girls decided to have some fun by going to the woods and party with hired male strippers. (I kid you not) Unfortunately for them, Frank's alive and he's continuing his stalking spree, killing off some of Madeline's gal pals, pizza guys, and dumb boyfriends before finding out where she's at via answering machine.

Plot-wise, Possession isn't all that interested in breaking any cliches that we have seen millions of times from other slasher flicks of its era. If anything, though, they did attempt to give some character to their main killer by molding him after Psycho's own Norman Bates, mother-dominated and all, but once the girls head out to the woods, he was reduced to a snickering goofball with a camouflage face-paint and a mean machete. The rest of the cast are hardly memorable thanks to a horrible combination of amateurism, absence of characterization, and weak writing. Many of them died on screen without any real purpose apart from pumping up the kill count and I'm dang positive we were supposed to root for some of them, only I couldn't. For a lot of obviously good reason.

Thankfully, as much as the weak writing and disposable characters would have ruined this viewing, Possession has the charm of being "fun" outside the horror sequences. Yes, this is a slasher and the killings are supposed to be its main sell-point, but the murders are down-to-earth basic, like strangulation, stabbings, and one death by car engine, so there isn't much to go with on that department. Instead, the film won my attention for all the stupid things these characters do and all the weird shit you don't normally see in an ordinary hack-and-slash. I know we got female nudity as the staple exploit from this sub-genre, but Possession decided to cater both men and women by giving us not one, but two male stripping scenes! (with sleekly oiled dude bums. Don't worry, we got at least 3 female shower scenes, if you're into that) 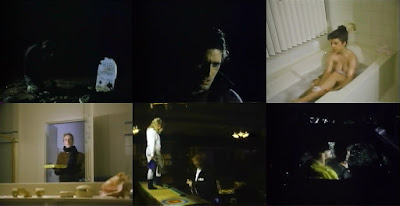 Not weird enough? How often do you get characters hopping into their car and track down the psycho who kidnapped their friend after the cops wouldn't do anything about it? Take note this actually happened 20 minutes into the film and the result is anything but scary or intense! Or how about the fact that our killer mourns his dead mum's grave that is a cardboard-looking tombstone, simply saying "R.I.P. Mother"! I couldn't stop chuckling!

The film is hilariously bad that you can't help but simply shut off and just let the goofiness of the film sink in. Thankfully, the movie moves at a decent pace once the weird first 30 minutes of Z-grade psycho-drama was up, giving us all the basic slasher goodness that may or may not answer your need for blood, guts, and feisty fondue.

Possession is simple a slasher and while it does show it was aiming for more than that, in the end, it is exactly just another film about a killer in the woods (and some apartments) offing people. It may have failed at giving us an original plot but its wonky direction, hilariously bad characters and quick pacing worked very well as a fail-safe that made this film bearable at a level. Not sure if I could recommend this but if you're open for bad cheese and/or rare slashers, then see it whenever you get the very slim chance!