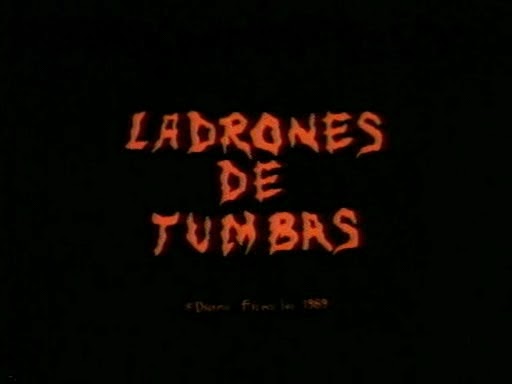 Just when you thought 80s Mexican slashers couldn't get any crazier!

It appears the churches of middle age Spain had to deal with Satanic traitors among them as one tried to impregnate a virgin within the catacombs of their own sacred ground. Luckily, Satanic Padre's God-fearing brethren came to stop him in time and gave him the ole' middle age torture treatment until he admits his pact with the Devil.

Seeing his soul is far from saving, the priests did what any holy man would do: curse a battle axe to hold his spirit trapped in his rotting body for eternity, until some curious idiot takes it out and free him to continue his murderous spree. Not exactly the most Christian thing I've seen so far but hey, I've seen worse!

So we now fast-forward to the present (or the late 80s, evident from the bouncy frizzy hair and mullets) where a gang of teenagers decided to ransack a local grave after finding out that it might have hidden valuables that they could sell off. So instead of partying that night like any normal teeners would, these kids hop into dug graves and secret passages to find that there are indeed treasures to be found, including that of an antique battle axe curiously stuck on a corpse's chest cavity.

And wouldn't you know it, they pulled it out.

Unknowingly releasing a now-undead murderous Satanist (in spandex!), the gang soon becomes the immediate victims for the revenant's murder spree, along with the usual cops, girls partying in the woods, and one priest who knows what's going on. Will anyone be safe from the tights-wearing zombie axe murderer? Only an old cop and the standard virginal final girl would know!

So as you can see, Grave Robbers is a pretty standard slasher with a few creative and highly entertaining quirks that put a spin to your usual slasher film tropes. While Satanic rituals isn't entirely new for this sub-genre in the 80s, as films like Midnight (1982) and Hack-o-Lantern (1987) used this backdrop as their killer's motive, none of them has the cheesy feel and execution as Grave Robbers did with its villain; while the aforementioned films utilize the cult through simple rites, this film decided to put some supernatural action into its foray by letting its killer use other powers such as telekinesis, teleportation, regeneration, transmutation with his surroundings, and in one utterly gory scene, the ability to disembowel a victim from the inside of their own gut. Think of it as that 80s witch slasher gorefest Superstition (1982), only with a balanced scale between of what is a slasher and what is a supernatural gore flick. There's also a bit of Omen (1976) influence going on as Spandex Satanist tries to impregnate a virgin victim in hopes of releasing the Antichrist to the mortal world and just like that 70s classic, the climax involved our heroes trying to stop him before it is too late, with additional fist fights!

Not much to say about the acting as they do come out okay as far as cheesy lines are concerned. Much like most slasher victims, they don't stick around pretty long since the killer wastes no time offing them once he gets the chance. Thankfully, we do have some considerable casts that rightfully deserve their survival, not because they're developed, but because they're just pretty fun to have around.

Above all of this, I really love the effects in this film; hacked faces, necks chopped with battle axes, messy viscera, the only time it looked a little loopy was that one hand-hacking scene but the rest is a gorehound's paradise. Heck, even the zombie looks pretty cool; looking pass his odd choice of legwear, he looks pretty badass with his hooded cloak and chains. He has the Jason Voorhees spirit, backwoods stalking and painlessly unflinching whenever he gets damaged. The only odd thing about him is the whole impregnating goal; I dunno, I'm never for one in regards to necrophilia but...how exactly was he gonna do it? He used to be all bones and his current zombie state isn't any better so...? (Please don't go there. I beg you. Nekromantik was enough to scar me)

Eitherways, Grave Robbers isn't going to win for an original plot as this is basically The Omen intercoursed with a post-A New Beginning Friday The 13th sequel but the final product is a solid late 80s/early 90s slasher from Mexico that packs a whole lot of gory fun and good goodah. Check it out whenever you get the chance!