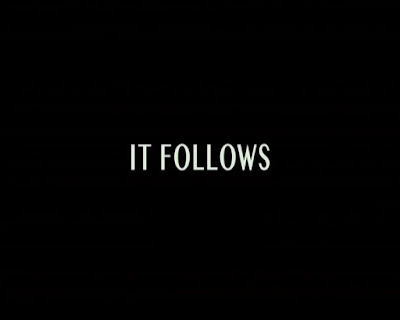 Just when you thought horror flicks are becoming more recycled nowadays, something like It Follows happen. It's not a slasher, but it knows how to be influenced by one and churn up what it learned for its own good.

Opening with a random girl in a panicked state, we see her run out of her own house before driving off to the beach. There, she calls her father and says her goodbyes as something unseen makes their presence known to the girl. By morning, she is dead, her leg mangled up in the most shocking visage.

We then switch our attention to Jay, a college student in Michigan who's as normal as any teenagers can be, loves to swim, hang out with her hipster-esque friends and her boyfriend, Hugh. The two eventually hook up and have sex in an abandoned building one night, an event that is, apparently, for the worst.

It turns out that by doing it with her, Hugh passed a curse to Jay. The curse takes form of an entity that stalks the last end of the chain with the intent of killing them before going back to the ones who passed it. Only those who are cursed can see this entity and, to make matters more complicated, it changes its appearance to any person of age and/or gender.

Jay is then left to fend for herself against this entity, who now has taken its close chances to kill her off first hauntingly across her campus' hallways, and then later at her own home. When the attacks place Jay at her wit's end, her friends took notice and help her out with what could be a real phenomenon. Surely enough, they themselves see what the entity is capable of and it is only a matter of time before it gets to their friend. With very little options in stopping the creature and with her friends now in the line of danger, Jay has no choice but to find a way, any desperate way, to stop it.

The best way to describe It Follows is pretty much said by most reviewers out there; dream-like. This is no surprise as writer and director David Robert Mitchell got the idea of this film from a recurring nightmare he had when he was younger, wherein he is similarly stalked by an unseen creature. Due to this, much of the film’s execution dwells on the curious side; there is nightmare logic surrounding the whole premise, with no clear indication to when the entire film takes place (it’s “now” but with black-and-white vintage horror being played in a 50s style TVs and a futuristic eBook reading device that looks like a cross between a Smartphone and a girl’s powder kit) and the unwavering focus on teenagers turned adults into disembodied voices, background on-goings, and forms the entity takes.

Many may say that the film is a metaphor of teenage perspective, which is all not that far from the truth as themes of repression and fear of sexual infection are played around, along with other teenage dilemmas such as drug dependency (Jay was given a full meal and a pill at one scene. All she took was the pill) and suicide (Jay running her leg against a blade of grass), though by a lesser extent.  By mixing this hinted drama with the horror of the supernatural, It Follows somehow found a way to make it all work and deliver a chilling and expressive horror film that relies little on gimmick and more on what could make us unnerve, psychologically and emotionally.

The film borrows a lot of elements from other horror sub-genres, mainly slashers and ghost films, to make it as creepy as possible. While the curse angle is obviously a tribute to the supernatural, most of the other influence would be put to use in shaping the entity itself as it behaves quite similar to our human monsters, slowly walking, getting up whenever it appears wounded, and preferring to use its brute strength to do its killings than exploit its own supernatural nature. The very fact that it also changes appearance can come quite shocking and uneasy; in one scene, we see this entity take form of a girl and casually walk in to a beach full of people. One could never expect that it is the entity as the form it takes perfectly blends in and no one will notice until it begins hurting and killing whoever it is after.

With the little to no explanation given to what the curse is and why it behaves this way, the hopelessness of the situation is another working actor that makes It Follows scary. Some of the executions for the attacks did come quite comical, however, but this can be overlooked with the film’s other technical advantages such as the Halloween (1978) inspired soundtrack, shocking visuals, and atmospheric editing.

I can honestly say that this film earned the right to be included as one of the films to beat for modern horror. Interestingly, a lot of our modern indie releases are becoming quite imaginative and skilled, and Mr. Mitchell proves himself with this instant cult classic that he can be a worthy name for this genre. That being said, I am proud to have finally seen this unique take on all things familiar and for those who haven’t, keep an eye on this one. It’s a keeper!