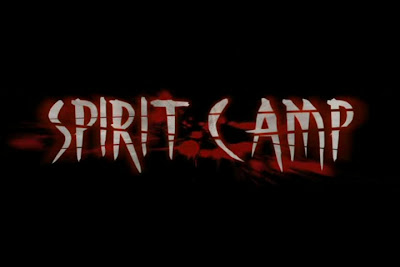 Paint-by-number is a phrase that is likely to get used a lot when folks describe a slasher movie. It's a pain for some to see a movie with basically the same plot as the ten others would have under the same sub-genre, but for a few, a copy-pasted plot can be forgiven with factors such as execution, characterization, special effects, or entertaining cheesiness.

Spirit Camp is a movie that took the simplest 80s backwoods slasher plot and basically used cheerleaders as a plot point. Would have been really impressive if it was the first to do this but seeing we already have films like Cheerleader Camp (1987) and The Cheerleader Massacre (2003), the film would have been a failed attempt but thankfully, it managed to pull off a decent amount of entertaining cheese and some neat twists to keep the bodycounter in all of us entertained.

In the simplest way to describe the story, it's about five girls attending cheerleading camp to help them boost their morale and practice their routine for an upcoming game. Sticking out like a stick on a mud pile is one Nikki (Roxy Vandiver), a lonesome punkette with a criminal record and a spiky hairdo, who is only in this charade of pigtails and pom-poms cuz it'll help her lessen her parole. Things start off rather simple for these gals until, one by one, team mates and visiting boyfriends began to disappear. Could it be the doings of an escaped convict from a nearby facility? Or perhaps it's the wrath of the huge groundskeeper who's always holding an axe? Who ever it is, they'll stop at nothing until all of these airheads are dead on the ground, that is until some of said airheads (and Nikki) start to fight back.

There's not much to complain about except, perhaps, the lack of proper acting to make some of the would-be harrowing scenes much more exciting to watch, and the noticeably uninspired killings, most of which occurring offscreen. Of course, I do understand that these are likely due to budget constrains so I will let it slide, but a little variation on the murders wouldn't hurt, especially for a slasher movie. (I believe they used the same axe kill make-up twice, each on different actors and scenes)

Apart from this, I did enjoyed Spirit Camp since it respectfully captured the feel of 80s backwoods slashers it pays tribute to; the cast are, I believe intentionally, cheesy to parody the very slasher victims they are portraying, and a good dose of red herrings are placed around with minimal screen time, for us to ponder around and suspect once the murdering starts. The only one with depth is our punkette heroine who was given an insightful character and enough wit to challenge not only the killer, but also the outrageous authority figures around camp.

When it comes to the horror portions, Spirit Camp kept it calm yet bloody; the murders, as mentioned, are restrained to shots of a weapon slashing or dropping, cutting to the aftermath of said slaughter. I find this an endearing way to save budget while still keeping the spirit of a slasher film alive but, as mentioned again, the killer's limitation of using an axe and a knife gets pretty repetitive, with the only other weapon they wielded was a knitting needle. I'm also not a big fan of the killer's dollface mask as it comes off quite silly at times, completely in contrast to the serious body language of the murderer; nonetheless, seeing this is a cheesy slasher, I guess its in the right place.

Production wise, Spirit Camp boasts an impressive looking camera and light work and a direction that is fast enough to keep us on our feet. It did slowed down around the last third when nearly all of the cheerleaders are killed, focusing a bit on the whodunit play as our surviving casts suspects one red herring character to the next to be their killer. It soon reveals a twist that, while I honestly didn't expected it, seeing how obviously cliched some of their attempted might-be killers were, the reveal was underwhelming.

Still, the whole film was fun no matter how many ways I try to look at it. It is certainly not a movie trying to reinvent anything but is simply there to exist and be enjoyed. Rent it!